Chancellor Angela Merkel has to manage a marathon program today in the refugee crisis. Her day of stress began with a cabinet meeting in Berlin, in which she made Head of the Chancellery Peter Altmaier the refugee coordinator. Then she hurried to Strasbourg and gave a long speech before the European Parliament.

Because concurrence with her refugee policy is crumbling in her own ranks and resistance in the CDU and CSU is growing.

Merkel received a red-hot communiqué about her refugee policy, signed by 34 party functionaries and eight federal states. It said: “The presently practiced ‘policy of open borders’ is compatible with neither European nor German law, nor does it harmonize with the program of the CDU. Therefore, a large number of members and voters of our party no longer feel that they are represented by the present direction of the CDU-led federal government in refugee policy.”

Merkel is under still more pressure, because the CSU is rebelling against her refugee policy ever more openly.

At a meeting today of Bavarian district heads and mayors in Ingolstadt, Bavaria’s governor, Horst Seehofer (CSU) threatened “effective self-defense” of the Bavarian Free State, if the federal government did not further provide for a limitation of the numbers of immigrant

Christian Bernreiter (51, CSU) Commissioner of the district Deggendorf and president of the Bavarian administrative districts legislature: “The situation is clear. We have reached our limit! We are not finding any more accommodations. We canvassed 35 properties and found nothing. We are throwing up our second temporary facility. It cannot come to forced institutionalization. At that point if not sooner, the mood in the population will shift. We absolutely need a limit.”

Rolnd Weigert (46, independent) Commissioner of administrative district Neuburg-Schrobenhausen: “The situation is difficult. We can’t handle the refugees anymore! We have leased about 30 decentralized facilities. There are no more. We are having to squeeze 188 refugees into a container town intended for 84 people! We are lining them up vertically. Soon we will have to start stacking them. The public’s acceptance is breaking down more and more. It can’t go on.”

Michael Fahlmüller (47, CSU) Commissioner of administrative district Rottal-Inn: “We are a border territory and — We are done! Acceptance of anymore refugees is not do-able.”

Heinrich Trapp (64, SPD) Commissioner of administrative district Dingolfing-Landau: “This onslaught is too much for us. We cannot take any more refugees.”

Willi Hogger (65, independent) Vice Commissioner of administrative district Dingolfing: “We can still take refugees, Every six or eight weeks, we have to take over another school gym, and naturally that causes problems. We need a limit.”

The Annotated Agenda for this session rightly focuses on the extreme escalation of the refugee inflow to our countries, and rightly notices that even the first step of dealing with the migrants is a severe financial liability to our countries. 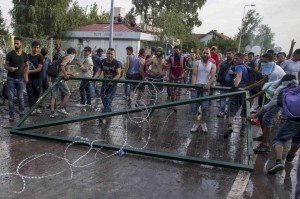 First of all, it is a clear principle of international law and of OSCE that every nation has the right to live within well-defined and secure borders. However, even that principle seems to be crumbling under the pressure of immigration. The lofty ideal of the Schengen system was that the external borders of the Schengen area would be strongly defended against illegal immigration, in order that internal border control could be eliminated.

How many war criminals or potential terrorists enter the country amidst this massive influx of migrants? Does anybody know?

One security issue of particular concern is the fact that the Islamic State has declared that it will send warriors and would-be terrorists along with the immigrants currently entering our countries. These radical Islamists are to be sent here in order to establish and strengthen terrorist networks, and to organize terrorist attacks on our institutions, media and non-Islamic organisations. The recent terrorist attacks on “Charlie Hebdo” in Paris, on an art and freedom conference in Krudttønden, Copenhagen, and on a Copenhagen synagogue demonstrate clearly the kind of attacks the Islamic State and their supporters have in mind.

The year 2015 began with three lethal terrorist attacks on European soil, one in Paris and two in 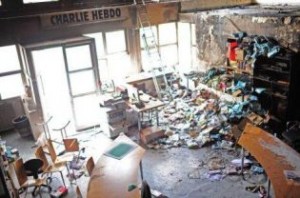 Copenhagen. The attacks targeted the secular tradition of satire and mockery, the freedom of artists to express themselves, and the Jewish community. All three attacks constitute hate crimes of the worst kind, and all were motivated by the same ideology: a radical interpretation of Islam. In order to prevent future hate crimes of a similar grave nature, we need the courage to confront the root cause of the problem, brushing aside lesser fears of being accused of ‘discrimination’ or ‘intolerance’.

In Case You Missed It:  Get Ready for the Economic Collapse
Posted in Terrorism and tagged Border, Chancellor Angela Merkel, Europe, Germany, Illegal Immigration, Muslims, Terrorism.

Courtesy of Walid Shoebat: This is unbelievable. You think when Revelation 12 talks about the “flood” of immigrants who will...