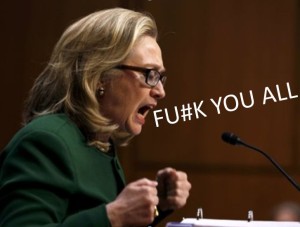 For some inexplicable reason, Bernie Sanders elected to throw Hillary Clinton an undeserved life jacket during the CNN debate on Tuesday night.

Rather than citing Clinton’s propensity for lies and corruption, the old man chose to provide cover for the “inevitability” queen by declaring that the American people are “sick and tired of Clinton’s ‘damn e-mails'”

Sanders’ magnanimous gesture was greeted with cheers and applause from the Democrats in attendance, by Hillary herself, and was exactly in concert with the CNN script which called for Clinton to be treated with kid’s gloves worthy of a sitting president.

Unfortunately for Hillary, however, her damn e-mails are still the subject of an FBI investigation and her role in the slaughter of four American diplomats in the Benghazi terrorist attack of 2012 will be examined during a Congressional hearing later this month.

Thankfully, the FBI and Congress are unlikely to gloss over Hillary’s crimes with the reckless abandon and nonchalance exhibited by Bernie Sanders.

After all, the issue is really about national security and responsible protection of American lives, subjects which are still of vital importance to most Americans!

In Case You Missed It:  4 Things to Know About the British Group Targeting The Federalist
Posted in Freedoms.

Abortion Survivor to Cecile Richards: ‘I Am So Thankful to Be Alive’

Gianna Jessen wasn’t supposed to live. But she did. Born alive after her biological mother’s botched late-term abortion at a...