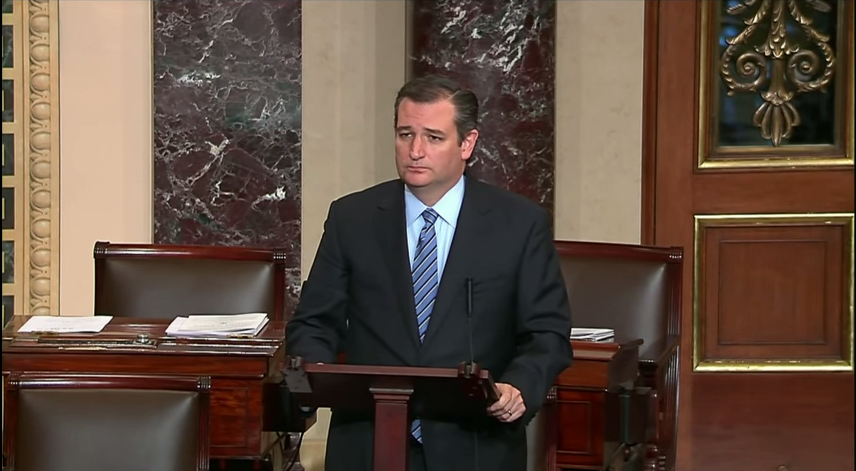 On his increasingly popular radio show yesterday, Mark “The Great One” Levin had some kind words to say about Ted Cruz. Here’s what he said in the last 10 minutes of his show:

Ted Cruz is the most consistently conservative candidate running.

The conservative talker also blasted Mitch McConnell, the Republican majority leader in the Senate, who recently shut down Ted Cruz when he used his time on the Senate floor to educate voters about the deceptive games McConnell and his ilk play.

“Today we have a guy by the name of Mitch McConnell […]. He’s got no class whatsoever. And he gets this really sick joy in trying to control the Senate floor within his own caucus. Harry Reid can do whatever he wants, Chuck Schumer can say and do whatever he wants, and all the rest of that [group] of leftwing cooks can do and say whatever they want. Barack Obama runs circles around Mitch McConnell and Republicans in the Senate. But he literally spends hours organizing the Republican caucus to shut down Ted Cruz. Because for Mitch McConnell it’s not about the country, it’s not about the Constitution, it’s personal.

And so, Levin explained, McConnell has decided to take Cruz down… or — if he’s unable to — at least to block each and every single attempt of the senator from Texas to get anything worthwhile done.

Levin went on to say that Cruz “comes under attack” for the simple reason that he’s actually a principled conservative.

And, clearly, the Cruzes of this world.

Earlier in the show, Levin also went after Rand Paul, who endorsed McConnell when he was up for reelection and who recently attacked Cruz by saying he was “done here” — just because the Texan isn’t a “go along to get along” kind of guy. “The Great One” has little patience with such talking points pushed by the establishment and rightfully put Rand in his place. He concluded:

He then referred to the rating system at ConservativeReview, a great website of which he recently became editor-in-chief. Cruz’s “Liberty Rating”? 96%. Levin:

“It doesn’t get much better than that!”

Although he stressed that he wasn’t endorsing anyone yet, Levin made clear that Cruz is one of the (few) Republicans in the Senate he greatly respects. Quite impressive considering this praise is coming from a guy who used to work for Ronald Reagan and who is now one of the most influential conservative commentators in the nation. Rand and McConnell can put that in their pipes and smoke it.

US President Barack Obama's administration refused to hold the Palestinian Arabs accountable for the recent wave of lethal Arab terrorism...