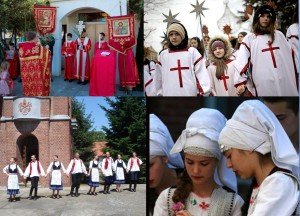 The Hungarian government is pushing Russia to do more to protect Christians from Islamic persecution. According to one report:

“As representatives of Christian civilization, we should protect the Christians,” he said at a meeting of the inter-governmental Russia-Hungary Commission in Moscow.
Szijjarto stressed that Christian values need to be protected both in Europe and in the East, and that Russia “should play an important role in it.”

Hungary has been swarmed with tens of thousands of refugees fleeing conflicts in the Middle East and North Africa. The burden of the EU-wide refugee crisis prompted Budapest to take a hard line on the issue.

Syria has seen four and a half years of a civil war that was exacerbated in summer 2014 by extremists from Islamic State (ISIL) and Nusra Front militant groups, among others. Islamists gained notoriety for attacking and killing Christians, as well as worshipers from religious groups and Islamic sects that were not aligned with their form of Sunni Islamic religious fundamentalism.

Last month, Russia commenced airstrikes against extremist positions in Syria, currently the main country of origin for hundreds of thousands of refugees seeking security in Europe.  In the meanwhile neither the USA or Western Europe are doing anything to help the persecuted Christians.

In Case You Missed It:  VAX CARPET BOMBS: Aerosolized “vaccines” being developed that can be sprayed on human cities for automatic depopulation
Posted in Freedoms, Terrorism and tagged Christian Genocide, Eastern Europe, Hungary, Russia.

Republicans have voted to repeal Obamacare dozens of times. This week the House will try again using a budgetary tactic...