Germans are attempting to bring criminal charges against Chancellor Angela Merkel, accusing her of treason by opening the borders of Germany to mass migration. 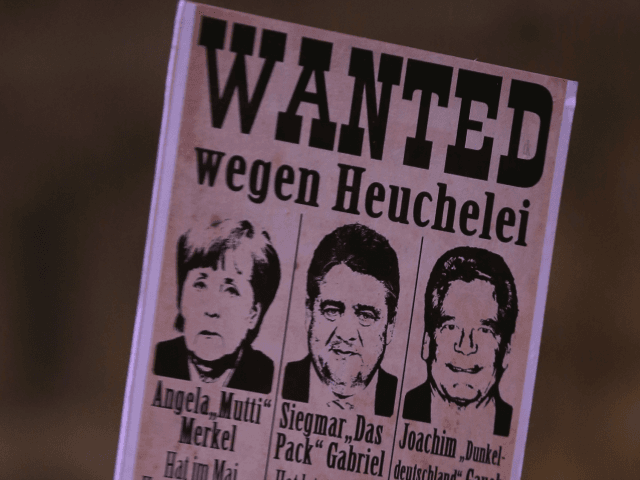 The Federal Prosecutors office in Karlsruhe, Germany, has received over 400 letters calling for it to open an investigation into Chancellor Merkel, the elected leader of the German government for high treason. The complaints cite the chancellor’s decision to open the borders of the nation to all comers in September, since when they claim “an unhindered flow of refugees have poured into Germany”.

Under German law, anyone who attempts to affect change to the German republic or damage the constitutional order by force or threat of force is guilty of high treason. The letter, of which dozens more are received by the state prosecutor every day and is reproduced by Compact magazine, insists the migrant flood satisfies the conditions, as demographic change is altering the existence of the republic.

Citing the German constitution, which in article 20 paragraph enshrines the right of Germans “to resist any person seeking to abolish this constitutional order, if no other remedy is available”, the call to action remarks that to “safeguard our identity” their goal is now “the overthrow of the chancellor”.

The forcing of migrants on communities, which involves the government seizing property such as parks, sports centres, and private dwellings to create asylum accommodation is a form of violence, the letter contends, making Chancellor Merkel’s actions genuinely treasonous.

In Case You Missed It:  What Causes White Guilt

Despite the carefully formulated argument and provision of evidence, the petitions for action may yet be thrown out by the court. Hard-left Taz newspaper reports the court is unlikely to accept that migrant violence constitutes an attempt by Chancellor Merkel to change the nature of Germany in a way that clearly violates the law.

These calls for Dr. Merkel to face criminal charges for her part in opening German to mass migration come among a backdrop of record low poll ratings for the chancellor, and increasingly fraught relations with her coalition partners.

The president of Bavaria has recently extended a hand of friendship to the Hungarian prime minister Viktor Orban, a direct snub to the chancellor, and even contemplatedbuilding a border fence with Austria if she doesn’t shift her stance on mass migration.

While the chancellor’s poll ratings falter, the anti-mass migration Bavarian president’s own score has shot up 11 points – an indicator of the direction of travel for the German public which is starting to count the cost of mass migration.

The latest “victim” of the wave of terror in Israel is the Knesset silverware cart. Visitors to the Knesset dining...