MORE than 800,000 refugees are set to return to Syria thanks to Vladimir Putin’s efforts to smash the Islamic State. 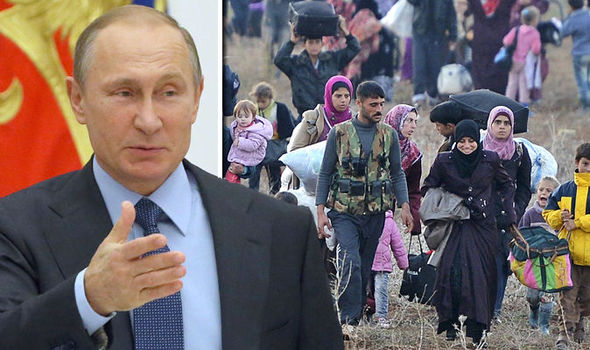 Last month Moscow launched a bombing campaign against the twisted State terror group, which controls vast swathes of Syria and has forced thousands of people to flee the country.

Many desperate asylum seekers have made their way to Europe via boats to Greece, with David Cameron agreeing to let 20,000 in Britain over the next five years.

But Russia’s bid to wipe out ISIS has been so successful that almost a million Syrians are elected to return to their homeland, Russian politician Dmitry Sablin claimed.

“He said thousands of terrorists are now fleeing Syria, and refugees are returning.”

Russian fighter jets have destroyed 285 ISIS and al-Nusra Front targets in the war-torn country over the past three days, according to Russian media.

The al-Nusra Front – the Syrian branch of Al-Qaeda – was formed in 2012 during the on-going Syrian civil war.

Russia’s military operation began on September 30 after an official request from Assad, his long-time ally.

There have been major changes in the country since Sablin last visited in May, the senator revealed.

He said: “People in Syria are now discussing their future. They want to rebuild their country.

“People are now walking safely through the streets of Damascus. There are fountains and restaurants open.

“Before Russia engaged it was terrifying to live there.”

By James Delingpole: The US government’s main climate research agency has refused a request by House Republicans to release key...