A midair heat flash from Metrojet Flight 9268 was detected by a U.S. military satellite before the plane crashed Saturday in Egypt’s Sinai Peninsula, a U.S. official said.

Intelligence analysis has ruled out that the Russian commercial airplane was struck by a missile, but the new information suggests that there was a catastrophic in-flight event — including possibly a bomb, though experts are considering other explanations.

ISIS was on the ground and took video of the flight, you can track flights online. ISIS does not have the capability to shoot down a plane from the ground at 30,000 feet, but it could have placed a bomb on the plane and took video to watch the effects.

There are a wide range of theories on what made the passenger jet plunge to the ground, killing all 224 people on board, but Russian officials say it’s too soon to speculate on the cause.

Officials at first downplayed the claim by Islamic militants that they brought down the Airbus A321-200, saying technical failure is the most likely reason for the crash. Now they are looking into all options.

Flight 9268 was on its way from the Egyptian resort of Sharm el-Sheikh to St. Petersburg early Saturday when it dropped off radar about 23 minutes into the flight, Egyptian officials say.

“There was nothing abnormal before the plane crash,” Egyptian Civil Aviation Minister Hossam Kamel said Saturday. “It suddenly disappeared from the radar.”

It cited the source as saying that an “unexpected’ and “nonstandard (emergency)” occurred “instantly,” which was why the pilots failed to send an emergency or alarm signal.

The website Flightradar24, which tracks aircraft around the world, said it had received data from the Russian plane suggesting sharp changes in altitude and a dramatic decrease in ground speed before the signal was lost. 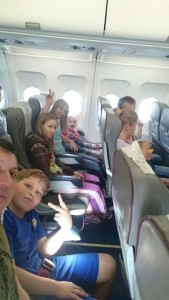 A photo found on a SIM card at the crash site, show passengers on the Metrojet just minutes before the crash.

A top Russian aviation official has said the plane broke apart in midair.

Metrojet official Alexander Smirnov said the airline had ruled out technical problems and human error. Protection systems on the plane would have prevented it from crashing, he said, even if there were major errors in the pilot’s control equipment.

Aviation analyst Peter Goelz said the disaster could have resulted from “some sort of catastrophic failure, perhaps caused by an earlier maintenance problem. It could have been a center fuel tank that might have exploded, such as what happened on TWA flight 800 years ago.

Explosives expert Chris Owen, from Alford Technologies, said that if swabs had been taken from plane debris quickly — while the wreckage was dry — it could be possible to identify any explosive residue in a lab.

Owen said it would be hard to rule out a bomb blast just because evidence of one had not been discovered. “If a bomb is ruled out, it will likely be because another cause has been found,” he said.

The A321-200 was built in 1997, and the airline company Kogalymavia, which flies under the name Metrojet, had been operating it since 2012, Airbus said. The aircraft had clocked around 56,000 flight hours over the course of nearly 21,000 flights, the plane maker said.

So far, officials have said all its inspections were in order.

According to the Aviation Safety Network, which tracks aircraft incidents, the same plane’s tail struck a runway while landing in Cairo in 2001 and required repair. At the time, the aircraft was registered to the Lebanese carrier Middle East Airlines, registration records show.

Kogalymavia’s Andrei Averyanov said the plane had been damaged in 2001, but had most recently been thoroughly checked for cracks in 2013. Not enough time had passed for major cracks to develop to a critical size since then, he said.

Smirnov, the Metrojet official, said that he had personally flown the plane in recent months and that it was “pristine.”

Of the passengers, 209 were Russian, four were Ukrainian and one was Belarusian. The citizenships of three other passengers are unknown.

The United States, Germany and Britain all had overflight warnings in place for Egypt’s Sinai Peninsula, before the Russian passenger jet went down killing all on board.

Germany’s warning, filed with the UN’s International Civil Aviation Organization on Oct. 5 remains in place until 2016, as do the British and American warnings. In a response dated Oct. 15, Egypt’s civil aviation authority replied that “all necessary measures for safeguarding the airspace are already taken from our side.”

The warnings advised airlines to avoid flying over the Sinai Peninsula below 26,000 feet and to avoid the Sharm el-Sheik airport due to extremist violence and, notably, the use of anti-aircraft weapons with what the U.S. Federal Aviation Administration described as having the potential to reach high altitudes.

James Clapper, the U.S. director of national intelligence, says he could not rule out that the Russian passenger plane which crashed in the Sinai was brought down by Islamic State extremists.

Robert Galan, a French aviation expert, says comments by a Metrojet executive that an “external impact” brought down its plane in the Sinai point to two possibilities: a bomb or sabotage.

Sabotage would require familiarity with the electrical or fuel systems of the A320-200, but he said hiding a bomb would need less knowledge.

In Case You Missed It:  Pray in Peace
Posted in Terrorism and tagged Airport, Egypt, ISIS, Jetliner, Russia, Terrorism.

Rob Brockhaus, a D.C.-transplant from St. Louis wants to bring conservatives under one roof, where Wi-Fi, printing, and ideas are collectively...