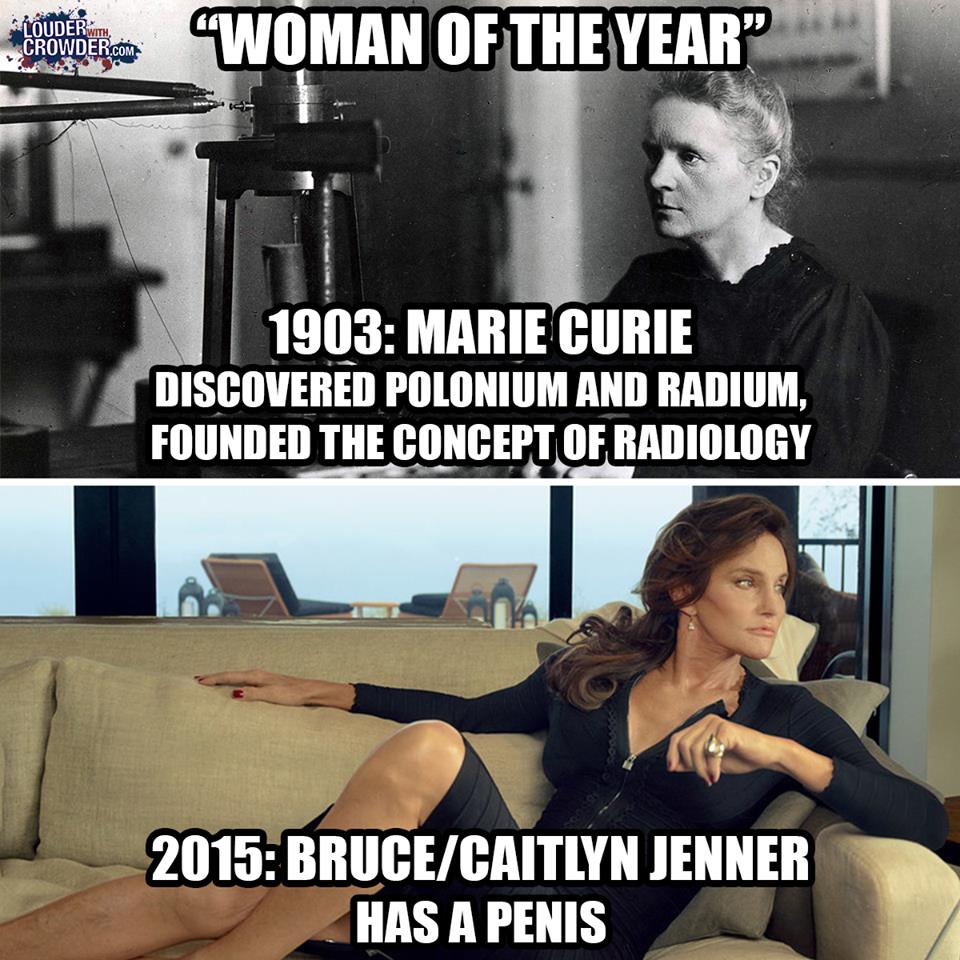 A man in a dress was recently voted Woman of the Year by Glamour Magazine. But not only is Bruce Jenner not a woman, he has not even been pretending to be one for an entire year. But facts don’t matter anymore.

Last week, the Guardian reported that a man in a dress had been moved from a men’s prison to a women’s one. The Guardian – as is now de rigueur– refers to this poor, deluded creature as ‘she’ throughout the article.

This man’s implanted breasts and copious lipstick had done nothing to limit his physical capabilities when he chose to head-butt a bar manager under the influence of alcohol, however.

This vicious assault rightly placed the perpetrator behind bars.

The hard-drinking, bellicose, head-butting cross-dresser – who rejoices under the name of Tara – didn’t like the inside of a men’s prison and wangled a transfer to a women’s prison after 160,000 people signed a petition on Change.org.

The Guardian also conveys to us the notion that any sort of clear distinction between maleness and femaleness in the mind of the beholder is the result of an ill-defined bigotry.

A woman calling herself Jack Monroe wonders: “Why do we segregate awards by gender anyway? Or children’s clothing? Aren’t we all a bit “non-binary” inside? In rejecting my “female” gender, I am not enforcing binary stereotypes, but asking why the hell we have them in the first place.”

I was amused to see that feminist warrior Germaine Greer has finally reached the reality wall and come out (no pun intended) on the side of the blindingly obvious: to be regarded as a woman, you actually have to be one.

This minor detour into the realm of reality has landed her in some hot water with the political correctness thought police.

The Guardian notes: “Several thousand people signed a petition protesting that she should not be allowed to give a lecture at Cardiff University (on women and power) because she has, in the words of the petition, ‘misogynistic views towards trans women.’”

The pattern is clear: if you want to be a woman (or a man) you can be one by pretending to be one, and if you can get enough people to agree with you: it’s true. And anyone who disagrees is a bad, evil person.

Surgery, petitions and ‘feelings’ make no difference to these realities.

I may wake up one day and decide I want to be an elephant. And if I have enough money, I’m sure I can

persuade a doctor to give me elephant hormones and implant a trunk onto my face.

And if I have a lot more money, I can persuade a large number of people to collude with me in my delusion and to vote in favor of it.

I may even get Trumpet Magazine to vote me Elephant of the Year. And if I get sufficient media traction after trunking a bar manager in the face, I may be able to get 160,000 well-meaning morons to vote to have me moved from a prison to a zoo.

I may feel like an elephant. I may have got you to call me Nelly. I may have a trophy on my mantelpiece telling me I’m the best elephant there ever was.

But the fact is: I am not an elephant. I’m a very sad man in denial of reality.

That this needs explaining at all is indicative of how insane we are being trained to be.

The fact is that Bruce Jenner will never be anything other than a man. Women have two X chromosomes. Men have one X chromosome and one Y chromosome.

This isn’t ‘hate’. It’s not a matter of opinion or feelings or surgery. It’s called reality.

This insanity wraps itself in the banner of tolerance but the last thing it is is tolerant.

It is about closing down the right of the people who are still able to think for themselves not to have their grasp on reality dislodged by accusations of bigotry.

Nor is this simply about a few individuals who want to pretend to be someone they are not. This tendency to insanity is being enforced at all levels.

In Sweden, for example, some schools now remove the male and female pronouns in favor of such words as ‘buddies’.

Slate.com reports that primary schools in Sweden which have adopted this nonsense: “[…] believe this fulfills the national curriculum’s guideline that preschools should ‘counteract traditional gender patterns and gender roles’ and give girls and boys ‘the same opportunities to test and develop abilities and interests without being limited by stereotypical gender roles.’”

And in recent months the media machine got busy promoting the idea of what it calls ‘sexual fluidity’.

The sixteen-year-old daughter of Johnny Depp – Rose Depp – was proclaimed to be of such a nature by Elle magazine to great acclaim.

Lily-Rose Depp makes a powerful statement about her sexuality in one gorgeous photo: http://t.co/Im1IWlWkMv pic.twitter.com/eIGEHrZ3pJ

Sexual fluidity is a form of bisexuality but without any gradations. It means you not only have no idea who you are or what you are, you also have no self-control.

Rose Depp is a young girl. Her conceptions of herself therefore change every twenty minutes. That, to me, is not news.

So does any of this matter?

Yes, because the line between what is normal and what is not, what is right and what is wrong is getting so thin that some even start now to justify pedophilia.

Accordingly, increasingly, we are being encouraged to think of pedophiles as victims.

The thoughts of one Ms. Schumann – who works with pedophiles in Germany – are reported in the Guardian. She says“[…] it is a trait, it is not a choice. They haven’t chosen to change, but they can learn how to live responsibly with their sexual desires.”

The same article later states: “Dr Goode, an Honorary Research Fellow and Convener at the University of Winchester who has spent years examining pedophiles and views surrounding them, thinks our attitudes are finally undergoing a ‘paradigm shift’ and that as ‘a society we can begin to understand that sexual attraction to kids is something that seems to be a part of human sexuality.’”

As with homosexuality and ‘transgenderism’, this round of social engineering is being brought in under the guise of fairness and equality. But there is nothing fair or equal about it.

If you are not prepared to bend over and accept a set of standards which should rightly have you loading your shotgun, experience already shows that you can expect no mercy.

In November, 2013 a couple who run a small hotel in the south west of Cornwall, England, and who did not wish to make their establishment available for two homosexual men to spend the night together had to pay a total of £3,600 in damages.

Sixty-nine-year-old Mrs. Bull and her 74-year-old husband said their decision was founded on a “religiously-informed judgment of conscience.”

The couple said: “We are just ordinary Christians who believe in the importance of marriage as the union of one man and one woman. Our B&B is not just our business, it’s our home. All we have ever tried to do is live according to our own values, under our own roof.”

Under the new political correctness, you do not have that right. Moreover, if you try to retain it you will be branded a bigot and heavily fined.

Peter Tatchell – that ambassador for the normalization of homosexuality – wrote in 1997: “While it may be impossible to condone pedophilia, it is time society acknowledged the truth that not all sex involving children is unwanted, abusive and harmful.”

Wrong, Mr. Tatchell, sex with children is – by definition – pedophilia. It is always unwanted, abusive and harmful. And no amount of media conditioning – or verbal finessing by change agents such as yourself – is going to change that fact for me or for anyone else who retains the power of reason.

Homosexuals have obtained the right to practice their preferences without fear of attack. As adults, they are morally responsible. They can choose.

Children cannot. My concern is that the homosexual cause is morphing into something else and that many well-meaning people with no objective standards will be conditioned to disregard their instinct to protect their children from evil predators just as they have been conditioned to call men women and vote against reality.

And if the price of speaking plainly in defense of our children is to be disliked by such people, that is a price I am happy to pay.

In Case You Missed It:  Jonathan Pollard for President of Israel
Posted in Freedoms and tagged Anti-Christ, homosexuality, Liberal Fascism, Liberalism.

With Open Gates: The forced collective suicide of European nations

[youtube 44vzMNG2fZc nolink] “A nation can survive its fools, and even the ambitious. But it cannot survive treason from within....