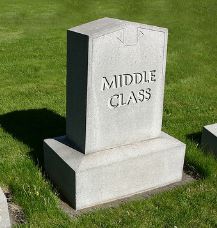 All over America, the middle class is dying and poverty is on the rise.  One of the primary reasons for this is the rapidly rising cost of living in the United States.  The cost of just about everything that average families shell out money for on a regular basis – food, rent, health insurance, etc. – is rising much faster than wages are.  In a previous article I noted that the federal poverty level for a family of five is $28,410, but 51 percent of all American workers are making less than $30,000 a year at this point.  We have seen an explosion in the number of people in this country that are considered to be “the working poor” and it gets worse with each passing year.

One of the most frustrating things for me personally is the rising cost of health insurance.  Barack Obama promised that his program would result in a decline in health insurance premiums by as much as $2,500 per family, but in reality average family premiums have increased by a total of $4,865 since 2008.

Just recently, I got a letter informing me that my health insurance premiums would be going up by close to 20 percent in 2016.  That is on top of an increase of more than 30 percent in 2015.  Sadly, the exact same thing is happening to millions of other families all over the nation.  The following comes from TruNews…

The Obamacare increases for 2016 have been released. Premiums will increase 3 times faster than officials claim.

Every state is different. Every insurer is different. New Mexico residents, for instance, can expect increases of 8 to 40 percent for the second-lowest cost silver plan. But for people in other states, including Arkansas the cost will increase less than 4 percent. Overall the average increase is 20.3 percent, according to analysis by The Daily Caller News Foundation, instead of the 7.5 percent originally asserted.

And of course it isn’t just health insurance.  Every time I go to the grocery store I am stunned by the prices.

They often try to hide the price increases so that we will not notice them.  Sometimes when I go food shopping I notice that some of my favorite things are “on sale”, but the sale prices are what the old “regular prices” used to be.  And food companies just keep shrinking package sizes, but the amount we have to pay stays the same or goes up.

Unfortunately, our food dollars are never going to stretch any farther than they do right now.  Thanks to erratic global weather, food prices are quickly moving higher.  In fact, according to the Crux global food prices just rose by the most that we have seen in three years…

The effects of El Niño are starting to reach the dinner table, with global food prices rising the most in three years on supply concerns for everything from New Zealand milk to sugar in Brazil and Southeast Asian palm oil.

An index of 73 food prices increased 3.9%, the biggest jump since July 2012, to 162 in October, the United Nations Food & Agriculture Organization wrote in a report Thursday.

The return of the El Niño weather phenomenon is changing weather conditions around the world, damaging crops with too much rain in some areas and not enough in others. The price of sugar increased more than that of any other commodity in the FAO report, soaring 17 percent, the most since September 2010. Excessive downpours in Brazil, the world’s largest producer, have slowed harvesting and reduced the amount of sweetener that can be extracted from cane.

As a result of this relentless squeeze on our pocketbooks, tens of millions of families are struggling to pay the bills from month to month, and the middle class is continually getting smaller.  As the middle class shrinks, poverty is growing and more Americans are becoming dependent on the government than ever before.  The following numbers come out of one of my previous articles entitled “21 Facts About The Explosive Growth Of Poverty In America That Will Blow Your Mind“…

#2 Other numbers from the U.S. Census Bureau are also very disturbing.  For example, in 2007 about one out of every eight children in America was on food stamps.  Today, that number is one out of every five.

#3 According to Kathryn J. Edin and H. Luke Shaefer, the authors of a new book entitled “$2.00 a Day: Living on Almost Nothing in America“, there are 1.5 million “ultrapoor” households in the United States that live on less than two dollars a day.  That number has doubled since 1996.

#4 46 million Americans use food banks each year, and lines start forming at some U.S. food banks as early as 6:30 in the morning because people want to get something before the food supplies run out.

#5 The number of homeless children in the U.S. has increased by 60 percentover the past six years.

#6 According to Poverty USA, 1.6 million American children slept in a homeless shelter or some other form of emergency housing last year.

It has become exceedingly clear that “the American Dream” is dying and that the future is not very bright for “ordinary hard-working Americans”.  I like how Rupert Cornwell described this in one of his recent articles…

The politicians still prattle on about “helping hard-working Americans” and “restoring the American dream”. But even as instinctively optimistic a breed as the Americans now believe they are being sold a bill of goods. What dream? The reality is that no longer is it a hard-working blue-collar American’s birthright to live better than his parents. Most probably, he or she will be worse off.

You might be one of those Americans that has fallen out of the middle class and into poverty.

Even in the midst of this so-called “economic recovery”, large numbers of formerly middle class Americans are losing their jobs and losing their homes.  And a surprising number of them end up either living in their vehicles or living in the streets.  The following comes from a recent article by Joshua Krause…

On any given night in America, there are over a half a million people living on the streets or in their vehicles. As you can imagine, that’s not a good place to be in your life, but it happens. If you think that this is something that might happen to you one day in the near future (and who are kidding, it could happen to anyone these days) here’s a word of advice: Don’t wait until the last-minute, hoping for that next job interview to come through as you burn through your savings. If homelessness is a real possibility in your life, it’s something that you should be preparing for, not waiting for.

The more money you have at your disposal when you decide to leave your home, the easier your life is going to be without a house. If you have no money, you’ll be living on the streets with little more than the clothes on your back. It’s better to put your savings towards a van or a truck that you can live in. Unlike living on the streets, you can actually maintain a fairly decent standard of living with very little money.

When I was growing up, it seemed like just about everyone in my entire high school was part of the middle class.  But things have changed dramatically in America since that time.  Today, the middle class is being absolutely eviscerated and our “leaders” don’t seem to care.

In Case You Missed It:  Congress, We Fixed It for You: Only $183 Billion Needed to Give Americans $2,000 Relief Checks
Posted in Financial and tagged Economy, Financial, middle, Obamanomics, US Citizen.

Discontent In Europe Over Refugees

The last time the German people where discontent Hitler cam into power, today Hitler II could come to power if European leaders...