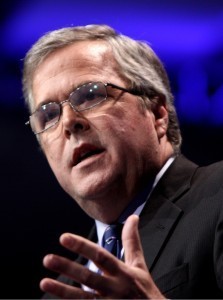 Jeb Bush’s fantasies about adding to the Bush family presidential dynasty have all but vanished, due, in no small measure, to his own failings. From four less than stellar debate performances to laying claim to political positions vehemently opposed by large numbers of conservatives (amnesty for illegals, adoption of common core standards), Bush has managed to convert a well-funded front-runner advantage into a bottom-rung embarrassment where a 4 to 6 percent standing in the polls is the new norm.

His “Jeb Can Fix It” slogan has done little to revitalize anything but the campaigns of Marco Rubio and Ted Cruz. This epic Jeb failure is illustrated by the fact that the Bush campaign is reportedly prepared to spend $20 million to destroy fellow Republican Marco Rubio.

The cash-rich group aiding Jeb Bush’s White House run has filmed a provocative video casting his rival Marco Rubio as ultimately unelectable because of his hardline stand against abortion.

That group, which has raised more than $100 million, has asked voters in New Hampshire how they feel about Mr. Rubio skipping important votes in the Senate.

And the group’s chief strategist has boasted of his willingness to spend as much as $20 million to damage Mr. Rubio’s reputation and halt his sudden ascent in the polls, according to three people told of the claim.

Seething with anger and alarmed over Mr. Rubio’s rise, aides to Mr. Bush, the former Florida governor, and his allies are privately threatening a wave of scathing attacks on his former protégé in the coming weeks, in a sign of just how anxious they have become about the state of Mr. Bush’s candidacy.

Their looming problem: In trying to undercut Mr. Rubio as unaccomplished and unprepared, Mr. Bush is a flawed messenger. Over the years he has repeatedly, and sometimes lavishly, praised the younger lawmaker, often on camera.

Some Bush donors, campaign aides and Republican operatives are cautioning Mr. Bush and his staff about the dangers of seeking to wound Mr. Rubio, whose career he assiduously nurtured for years when Mr. Bush was governor and Mr. Rubio was a member of the Florida House of Representatives.

“Given their closeness while governing, I find the whole thing baffling,” said Stuart Stevens, a Republican strategist who oversaw Mitt Romney’s 2012 campaign.

“I seem not to be alone,” Mr. Stevens added. “I don’t see any evidence that it’s working.”

Not working, indeed! Aside from whether or not the latest Bush scheme is working, the pertinent question should be:

What does spending $20 million dollars to personally destroy a political rival say about one’s judgment and grip on reality? Should such a person be entrusted with the lives and well- being of 330 million Americans?

Above all else, the $20 million ploy surely mocks any notion that “Jeb Can Fix It”!

"...the current stabbing attacks are far better that the thousands of rockets that will rain in Israel if a Palestinian...