Details have emerged of a shocking double rape suffered by a woman near a migrant center in Sweden, during which one of the attackers spat in her face. 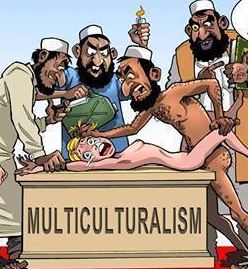 The incident, which occurred at the end of August, serves as yet another reminder that Europe is importing huge numbers of people from a culture which treats women as second class citizens.

The attack began after 2pm on August 23 when the victim left a restaurant in Strängnäs situated near the Hotel Mälarblick, which is currently being used to house asylum seekers.

The woman was followed by a 39-year-old Algerian man who subsequently assaulted and raped her before fleeing.

As the woman attempts to walk towards the center of Strängnäs to get help, she is accosted yet again by two more men, one a 31-year-old Syrian migrant, who violently rapes her both vaginally and anally while spitting in her face, according toDeputy Chief Prosecutor Henrik Olin.

The Algerian and the Syrian later asserted they did not know each other, a claim Olin doubts.

“They deny that they know each other. But they have lived in the same housing, they have been at the pub that same night, and they carried out these crimes right after each other. I think that the only reasonable explanation is that the offender who is charged with event number two somehow was aware of event number one,” said Olin.

It subsequently emerged that the Syrian migrant also sexually assaulted another woman in the same restaurant earlier that day by pressing his crotch against her and trying to kiss her.

“When she goes home together with a friend, she is stalked by one of the accused men and goes out to the area where the actual rape later takes place. She and her friend run away from the scene,” said Olin.

DNA was subsequently taken from the woman and matched with DNA taken from the rape victim, allowing the Syrian to be caught. The Algerian was also caught after DNA swabs were taken from men at the migrant camp.

Olin is calling for the culprits to be deported from Sweden after serving their prison sentences.

“77.6 percent of the country’s rapists are identified as “foreigners” (and that’s significant because in Sweden, “foreigner” is generally synonymous with “immigrant from Muslim country”), writes Selwyn Duke. “And even this likely understates the issue, since the Swedish government — in an effort to obscure the problem — records second-generation Muslim perpetrators simply as “Swedes.”

Rapes occurring in and around migrant camps are now so prevalent, that authorities in Germany are covering up details of incidents so as not to “legitimize” critics of mass immigration.

Just like week we covered three more rape cases involving migrants, one in Norway, another in Sweden and one in the United Kingdom.

But don’t expect feminists to draw attention to an actual rape culture being imported into the west, they’re too busy obsessing about one that doesn’t exist – the college rape crisis hoax.

12 Bills That the Filibuster Stopped From Becoming Law

Frustrated by an entrenched Democratic minority in the Senate, some of the Republicans who control both houses of Congress have renewed...