Now the Muslims liars, will start whining that they are afraid, that they think they will be the victims. It will start tomorrow in more two days, three days. 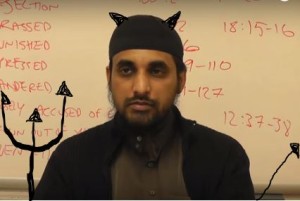 Every devout Muslim who prays once a day, or praying in the heart, his goal is the same for the purposes of devout Muslims who carried out the massacre in France today.
To Islamize the world, different methods for the same purpose.

Objective to Dominate the World with Islam
[youtube LjjrQ4oOTjo nolink]

Muslims are not obligated to the agreement they signed with a non-Muslim – a simple explanation.

Abu Ala Maududi, the founder of Jamaat-e-Islami, puts it this way in his book, Jihad in Islam:

“Islam is not a normal religion like the other religions in the world, and Muslim nations are not like normal nations. Muslim nations are very special because they have a command from Allah to rule the entire world and to be over every nation in the world. Islam is a revolutionary faith that comes to destroy any government made by man. Islam doesn’t look for a nation to be in better condition than another nation. Islam doesn’t care about land or who owns the land. The goal of Islam is to rule the entire world and submit all of mankind to the faith of Islam. Any nation or power in this world that tries to get in the way of that goal Islam will fight and destroy. In order for Islam to fulfill that goal, Islam can use every power available every way it can be used to bring worldwide revolution. This is jihad.”
http://muhammadanism.com/…/jihah_in_islam/jihad_in_islam.pdf

Two of the Paris jihad murderers came into Europe as “refugees”

BY ROBERT SPENCER Liberal Solution: bring in more, more, more refugees! “Revealed: Two of the Jihadis sneaked into Europe via...