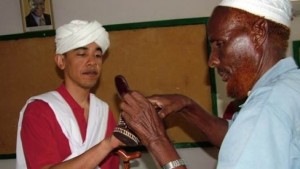 In response to the Paris terrorist attacks, President Obama has reaffirmed his bone-headed, inexplicable, and foolish approach to Islamic terrorism, said approach which remains steeped in fantasy and ignorance, shielded from the sting of reality, logic and common sense by a mind enslaved by Islamic doctrine and hatred of America.
Since news of the terrorist attacks first made headlines, Obama has:

Announced plans to “increase and accelerate” the admission of Syrian refugees into the US; and

Released five detainees to the United Arab Emirate in furtherance of Obama’s promise to shut down GITMO , ostensibly to assuage “hurt feelings” among Islamofascists.

Obama’s plans with respect to importing Syrian refugees has been highly controversial, especially among Republicans who note that one of the leaders of the Paris attacks came to the fray as an alleged Syrian refugee.

This administration argument is as reported at the reference:

In the wake of Friday’s horrific terror attacks in Paris, Deputy National Security Adviser Ben Rhodes was dispatched to the Sunday morning talk shows to spin his boss’ claim the previous day that the ISIS threat had been “contained.”

But he was also asked about the ability of the Obama administration to properly vet a wave of 10,000 Syrian refugees announced in September in light of reports that one or more of the Paris terrorists had entered and transited the EU as a Syrian refugee.
And yet Rhodes’ response that measures to properly vet the Syrian refugees are in place flatly contradicts the recent sworn congressional testimony of FBI officials.

Rhodes appeared on CNN’s State of the Union with Jake Tapper. It brought this exchange:

TAPPER: I think there is a question about how good this intelligence apparatus is, Christiane Amanpour – Christiane Amanpour reporting this morning that at least one of the terrorists, according to French authorities, seems to have smuggled himself into Europe by embedding with refugees.
Ben, are you confident enough in our vetting process as the United States brings Syrian refugees into our country to pledge that this will never happen here?
RHODES: Well, first of all, Jake, the threat of foreign fighters has been front and center from the very beginning of this counter-ISIL campaign. We have made that a focus, so that we’re working with countries to share information, to improve their laws and authorities to be able to monitor and detain people.
And we’re going to continue to do that. That will be a focus of discussion here in Turkey. With respect to refugees, we have the most extensive security vetting that we have ever had to deal with Syrian refugees coming into the United States that involves not just the Department of Homeland Security and the State Department, but also our intelligence community, the National Counterterrorism Center, so that anybody who comes to the United States, we are carefully vetting against all of our information.
And let’s not forget, Jake, that some of these people are people who have suffered the horrors of war. They’re women. They’re orphans. They’re children who have suffered at the hands of ISIL. We cannot close our doors to these people. We can focus on keeping terrorists out of the United States while having an open door to people who deserve a safe haven.
And when asked by Chuck Todd of NBC’s Meet the Press about whether the developments in Paris had given President Obama pause on admitting more Syrian refugees, Rhodes replied:
No, Chuck. We have very extensive screening procedures for all Syrian refugees who come to the United States. There is a very careful vetting process that including our terrorism community, our Department of Homeland Security. Let’s remember, Chuck, we’re also dealing with people who suffer the horrors of war. Women and children, orphans. We can’t just shut our doors to those people. We need to do our part to take refugees in need.
But as reported two weeks ago at PJ Media, FBI Director Robert Comey testified before the House Judiciary Committee that vetting Syrian refugees will be “challenging” when asked by Rep. Louie Gohmert about the quality of intelligence and information that exists on Syrians:
Gohmert: Well, without a good fingerprint database, without good identification, how can you be sure that anyone is who they say they are if they don’t have fingerprints to go against?
Comey: The only thing we can query is information that we have. So, if we have no information on someone, they’ve never crossed our radar screen, they’ve never been a ripple in the pond, there will be no record of them there and so it will be challenging.
Those concerns echo congressional testimony given earlier this year by FBI Assistant Director Michael Steinbach to the House Homeland Security Committee about the quality of information available on anyone coming out of Syria:
The concern in Syria is that we don’t have systems in places on the ground to collect information to vet…You’re talking about a country that is a failed state, that does not have any infrastructure, so to speak. So all of the dataset, the police, the intel services that normally you would go to to seek information doesn’t exist.
The FBI director was also asked by Rep. Gohmert during his testimony last month about the database the U.S. government maintained to screen Iraqi refugees, including an IED fingerprint database in addition to other intelligence obtained by U.S. forces and the Iraqi government — considerably more extensive than anything the National Counterterrorism Center has for Syria.
And yet despite the extensive database screening Iraqi refugees, U.S. authorities have admitted that possibly dozens of terrorists were admitted into the U.S. under that program, including two Iraqi terrorists living in Bowling Green, Kentucky, who were convicted of attempting to send weapons and money to Iraqi terrorists.
Comey also said during a speech last month that the FBI has 900 active investigations on suspected ISIS supporters and other extremists.”

Once again, Americans are perfectly justified in questioning the loyalty and commitment of our president.

The big question: Can our elected officials prevent Barack Obama from taking steps that will seriously endanger the health and safety of Americans?

In Case You Missed It:  The post-vaccine WIPEOUT of children’s immune systems has arrived
Posted in Freedoms.

A French official on Monday identified Abdelhamid Abaaoud of Belgium, 27, as being the mastermind behind the Islamic State (ISIS) attacks...