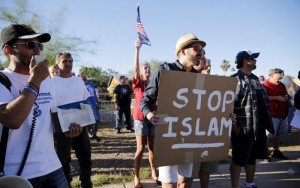 Twenty seven right-thinking state governors have bravely chosen to defy the seditious whimsy of Barack Obama by doing the “right thing” with respect to The One’s anti-American idiocy which would allow supposed refugees from Syria into our blessed land, in spite of the fact that those allowed in could include murderous thugs intent on bringing Jihad to the land of the free and home of the brave!

As reported in the media:

In addition to the mostly Republican governors, GOP members of Congress — including the chairmen of the Senate Armed Services, Senate Intelligence and House Homeland Security committees — have called for a halt to admitting Syrian refugees. A House Judiciary subcommittee will consider security concerns related to Syrian refugees later this week.

The issue gained political traction Monday as the world reeled from the horror of the Paris terrorist attacks, which killed at least 129 people in a string of bombings and shootings. Islamic State claimed responsibility for the coordinated Friday night assault on six locations.”

Leftist loons have argued that the governors would be acting illegally and in defiance of the US Constitution.
To which the obvious rejoinder would be, “So, let Obama sue!”

In Case You Missed It:  Orange County Dr. Jeff Barke Breaks His Silence on COVID 19
Posted in Freedoms.

Belgian prime minister Charles Michel has threatened to close radical mosques in the Molenbeek neighbourhood of Brussels that security services...