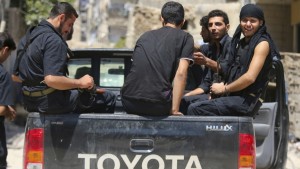 The six cell members were all based in the Arab town of Jaljulya, near Kfar Saba, and had planned to travel to Syria to join the jihadists’ ranks there.

The group was revealed after another Jaljulya resident, 23-year-old Nedal Ahmed Salah Salah paraglided across Israel’s northern border with Syria in October to join jihadists there.

Following his escapade intelligence services mobilized to identify him and possible associates, and quickly zoomed in on his hometown.

That very night two brothers from Jaljulya were arrested under suspicion they had helped Nadel to cross the border. They have been identified as Jihad Nadel (26) and Ahab Nadel Yusuf Hagla (22).

Both were quickly identified as ISIS supporters; the elder brother Jihad had even traveled to Syria in 2013 and fought among ISIS’s ranks for half a year before returning to Israel, where he was jailed until November 2014.

The pair admitted under interrogation to having helped Nadel cross the border, and even revealed they had joined him for paragliding sessions beforehand.

The unusual mode of transport was selected by Jihad, who feared they would be prevented from leaving the country by security at Ben Gurion Airport due to his security background if they opted for a more conventional route into Syria via Turkey.

The suspects also revealed the names of four other individuals involved in the plot, all of whom are also residents of Jaljulya: Anas Nadel Yousef Hagla (19) – Jihad and Ahab’s younger brother; Mohammed Amin Odeh (28); Mohammed Jameel Sa’ada Zaqaki (22); and Adnan Ismail Othman Einas (21).

Investigators revealed that the cell had been active for several months, headed by Jihad Hagla, and would meet regularly at his home for religion lessons, where Jihad would preach about ISIS’s ideology and methods and the need to support the “jihad” in Syria.

After several months of indoctrination the group decided to travel to Syria to actively support ISIS there, and drew up an extensive plan for doing so without detection.

Jihad and Nadel were to paraglide into Syria – as mentioned, due to concerns over Jihad’s terrorism record – while the remaining four would fly to Turkey, where they would cross over into Syria with the help of smugglers.

Ahab Hagla even took on the role of logistics manager to ensure the six would be able to reunite once in Syria; the group went so far as to organize secret online communication methods to evade detection.

Their plan began to unravel however, due to a mixture of incompetence and cold feet.

At the last moment two of the cell members – Adnan Einas and Mohammed Zaqaki – dropped out, fearing both the volatile situation in Syria and that their parents would not allow them to take part.

However, in October Anas Hagla and Mouhammed Odeh traveled to Turkey with the intention of joining ISIS, but returned to Israel when they failed to properly coordinate their passage into Syria with the jihadists.

At the same time as they were in Turkey, and around a week prior to Nedal Salah’s successful cross-border escape, brothers Jihad and Ahab Nadel traveled to the Golan Heights and attempted to paraglide across the border themselves – but were prevented from doing so by a technical problem with Jihad’s paraglider.

In Case You Missed It:  Corona and the IDF’s ‘Cutting-Edge Ways of Killing People’

Terrorism charges have been filed against all six at Lod Magistrates Court.

In recent months Israeli security forces have broken up several similar ISIS cells in both northern and southern Israel. The Shin Bet security service has warned such activities pose a real risk to Israel’s own security, as at least some of those who travel to Syria eventually return to Israel – equipped with training, indoctrination and combat experience they could utilize to conduct attacks within Israel’s borders.

Two terrorists were killed during an anti-terror police raid Wednesday in a Paris suburb, including a female suicide bomber who detonated herself. Several...