President Barack Obama would veto a Republican bill introduced in the wake of the Paris attacks to toughen the screening process for Syrian refugees, the White House declared Wednesday, according to AFP. 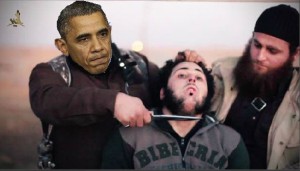 The House of Representatives could vote as early as Thursday on resolution 4038, unveiled earlier on Wednesday, which aims to block administration plans to resettle 10,000 Syrian refugees in the coming year.

“Given the lives at stake and the critical importance to our partners in the Middle East and Europe of American leadership in addressing the Syrian refugee crisis, if the President were presented with H.R. 4038, he would veto the bill,” the White House said.

Unveiled by House Homeland Security chairman Michael McCaul, the bill aims to strengthen vetting procedures for Syrian and Iraqi refugees in the wake of Friday’s attacks that killed 129, carried out by Syria-linked jihadists.

The plan would require the director of the FBI, the Secretary of Homeland Security and the Director of National Intelligence to certify that each refugee is not a security threat.

“This legislation would introduce unnecessary and impractical requirements that would unacceptably hamper our efforts to assist some of the most vulnerable people in the world, many of whom are victims of terrorism, and would undermine our partners in the Middle East and Europe in addressing the Syrian refugee crisis,” the White House said in a statement quoted by AFP.

Refugees of all nationalities, including Syrians and Iraqis, currently undergo the most rigorous and thorough security screening of anyone allowed into the United States, “all aimed at ensuring that those admitted do not pose a threat to our country,” the statement said.

The current screening process, it said, involves multiple federal intelligence, security and law enforcement agencies, including the National Counterterrorism Center, the Federal Bureau of Investigation, and the Departments of Homeland Security, State, and Defense.

“The certification requirement at the core of H.R. 4038 is untenable and would provide no meaningful additional security for the American people,” the White House said.

The legislation was introduced amid concerns over the entry of Syrian refugees in the wake of the discovery of a Syrian passport near the body of one assailant in the Paris attacks.

No less than 24 states announced earlier this week they would block the program to resettle Syrian migrants within their borders, though White House officials defended the current refugee program.

President Obama himself earlier on Wednesday struck out at Republicans, accusing them of demonizing “widows and orphans” and of “hysteria” following the Paris attacks.

“We are not well served when in response to a terrorist attack we descend into fear and panic,” he said, adding, “We don’t make good decisions if it’s based on hysteria or an exaggeration of risks.”

In Case You Missed It:  HUGE! CNN-NPR Photo-Journalist Jade Sacker was Embedded with Antifa Leader John Sullivan During Siege of US Capitol – Cheered “We Did It!” After Inciting Riot (VIDEO)
Posted in Terrorism, Tyranny and tagged Islam, Jihad, Muslims, Obama, Syria, Terrorism.