Senator Cruz questions Sierra Club President, Aaron Mair on Climate Change. Video courtesy of Senator Ted Cruz. The amazing thing here is not that the guy disagrees — what’s amazing is that he doesn’t seem to know what Ted Cruz is even talking about. 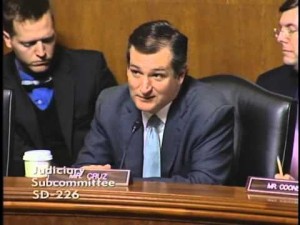 Senator Cruz questioned Mair about a portion of his written statement in which he said the science behind climate change and its effect on minority communities “should not be up for debate.”

Cruz asked, “I’m curious is the Sierra Club, is this a frequent practice to declare areas of science not up for debate, not up for consideration of what the evidence and data show?”

Over and over, Mair repeated the debunked “fact” that 97% of the climate change scientists believe the earth is heating up and the science is settled.

The assertion that 97% of scientists believe that climate change is a man-made, urgent problem is a fiction. The so-called consensus comes from a handful of surveys and abstract-counting exercises that have been contradicted by more reliable research.

Of the various petitions on global warming circulated for signatures by scientists, the one by the Petition Project, a group of physicists and physical chemists based in La Jolla, Calif., has by far the most signatures—more than 31,000 (more than 9,000 with a Ph.D.). It was most recently published in 2009, and most signers were added or reaffirmed since 2007. The petition states that “there is no convincing scientific evidence that human release of . . . carbon dioxide, methane, or other greenhouse gases is causing or will, in the foreseeable future, cause catastrophic heating of the Earth’s atmosphere and disruption of the Earth’s climate.”

The 97% claim reported the results of a two-question online survey of selected scientists. Mr. Doran and Ms. Zimmerman claimed “97 percent of climate scientists agree” that global temperatures have risen and that humans are a significant contributing factor.

The survey’s questions don’t reveal much of interest. Most scientists who are skeptical of catastrophic global warming nevertheless would answer “yes” to both questions. The survey was silent on whether the human impact is large enough to constitute a problem. Nor did it include solar scientists, space scientists, cosmologists, physicists, meteorologists or astronomers, who are the scientists most likely to be aware of natural causes of climate change.

The 97% number was created by meticulously selecting certain surveys using murky terminology to formulate a specific narrative.The media has also completely failed to report the existence of many studies showing that a majority of scientists are skeptical of man’s connection to global warming.  It may be difficult for some to admit it, but the jury is still out.

It also failed to address the fact that a sample size of only 200 self proclaimed scientist doesn’t even remotely form a 97% consensus among the thousands of scientists who have weighed in on the subject and NOT CALCULATED IN THAT 97%.

Ending a Century of Palestinian Rejectionism

by Daniel Pipes Washington Times October 27, 2015 Palestinians are on the wrong track and will not get off it...