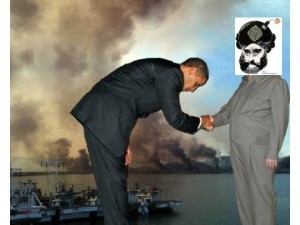 As our beleaguered president mulls the chaotic state of the world, much of which is attributable to his arrogant, ignorant behavior, and his adamant refusal to accept the truth about the correlation between terrorism and Islam, our fragile planet spins irrevocably towards World War 111.

To date, Obama’s “strategy” for dealing with ISIS has been based on a naïve belief that Islam is a misunderstood & unfairly maligned religion. Indeed, Obama believes that Islam is the epitome of righteous, humane principles, fully deserving of being admired and respected globally as a “Religion of Peace.”

In Obama’s mind, youthful memories of Morning calls to Muslim Prayer are more representative of Islam than distorted, exaggerated media events such as 9/11, the Boston Marathon attacks, deadly “Workplace violence” perpetrated by an unhinged Muslim in the military, and recent “setbacks” in Paris and Milan.

Sadly, our misguided president subscribes to the unrealistic notion that ISIS and Al-Qaeda, as well as other radical Islamic terrorist groups, can be assuaged by avoiding harsh criticisms and by taking specific actions to convince said thugs that Americans are sorry for misjudging them, and by replacing Islam-phobic US policies and procedures which impugn the glory and good of Allah and the Religion of Peace with “feel good,” carte blanche acceptance of all things Islamic and Muslim.

All of which is why our addled president is doubling down on his flawed and failed strategy, which he foolishly claims is working, and which involves shutting down GITMO, importing tens of thousands of Syrian refugees, despite official warnings that such a massive influx cannot be supported by essential vetting, and by implementation of the Iran nuclear “deal” which all but guarantees that the most prolific terrorist state in the world—operated by the Islamic Mullahs of Iran—will be allowed to obtain nuclear arms.

The big question: What more can Barack Obama do unilaterally to level the playing field between America and Islamic lunatics?

Perhaps Obama should issue an Executive Order to ban any and all public displays of the Christmas spirit, including scared music, holiday shopping, Christmas trees, bright lights, exchanging of gifts and Christmas cards, and other disrespectful behavior designed solely to mock Allah and the Prophet Mohammed?

Might such an unlawful decree placate Islamic extremists, at least until January 1?

At Least 83 Radical Mosques Operate Openly in the U.S…