By ULF ANDERSSON IN TÄRNSJÖ, SWEDEN 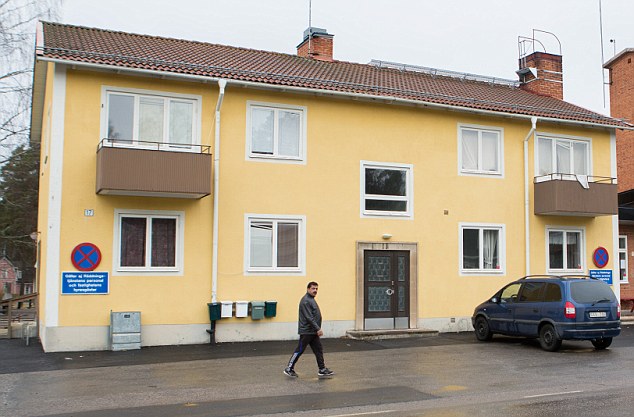 A tranquil Swedish village has been torn apart by bitter tensions after the arrival of refugees.

Tärnsjö, 150km north of Stockholm, has become a hotbed of resentment where migrant children as young as five need a police escort to get to school.

Battle: The problems in Tärnsjö started when migrants, many of them living in this centre, began throwing stones at cars as they passed. Locals retaliated, and threw stones back.

Another bus of demanding refugees refused to get off when taken to the isolated village, demanding to be taken elsewhere.

Residents and newcomers have exchanged insults, thrown rocks and set fire to cars, leaving many on both sides scared to leave the safety of their homes.

In the last few months, with 10,000 asylum seekers arriving a week, the country has reintroduced border controls and the anti-immigrant Sweden Democrats has become the second largest party in Sweden, opinion polls show.

Instead Tärnsjö, a relatively small village with a population of 1,200, is a snapshot of those places where bubbling anger has spilled over into violence and arson.

The authorities have warned it is only a matter of time before someone is killed as refugees engulfing this once-peaceful nation.

The problem in Tärnsjö, conservative-right local councillor Michael Ohman told , comes down to the fact many of the villagers never wanted the migrants to move in.

‘Racial tension has divided the village into two groups; those who support the immigrants and those who want them gone,’ he explained.

‘There has been fighting between immigrants and the people living here.

‘The village integration works badly because people don’t want immigrants in the village. This is no longer a happy community, it’s divided and is not a pleasant place to live.’

The councillor continued: ‘We have the highest tax rate in the county because we are paying for so many immigrants.

‘Everyone who comes gets an allowance of 200 Kroner (£20) a week and free housing, and who pays for that? Us, taxpayers.’

Anders Petterson, a migrant liaison officer, admits many were ‘outraged’ when they began to arrive.

The immigrants have caused all kinds of trouble for us. I have friends whose storage spaces have been burgled by immigrants and bicycles have been stolen.

‘It is particularly one family. It is the one which has caused all these troubles.

‘There is a really bad tension in the village because of the refugees.’

Others were nervous about how much further the violence might go.

They fear they are on the brink of a similar incident to the one where Anton Lundin Pettersson, 21, walked into a school in Trollhättan in north of Gothenburg, wearing a helmet, a Star Wars mask and used a sword to kill two migrant students.

Back in Tärnsjö, Lillemor, a hairdresser in her mid-fifties who didn’t want to give her surname, said: ‘I’m concerned about the situation in the village.

The refugees are just as scared. Tamam, who is living in the apartments with his wife Rabaa, son Hamza, 13, and daughter Batoul, 12, is the refugee whose car was torched.

‘We don’t feel afraid when we’re at home and all we want is peace and quiet.’

The tensions in Tärnsjö are far from a one off. Across the country, buildings which are earmarked to house asylum seekers are being set fire to at an alarming rate.

Outside of Tärnsjö, fire has become the weapon of choice for extremists angry at how many people have arrived in Sweden since the start of the year.

Even the government has taken action, introducing border controls for the first time since the migrant crisis began.

Anna Kinberg Batra, the leader of Sweden’s centre-right Moderate Party, which has always been pro-asylum seekers, has gone one step further, and called for people to be turned away at the border.

‘If we do not act now, we will have a collapse in the system,’ she warned, according to Deutche Welle.

The numbers speak for themselves. Since September, 80,000 refugees have arrived – the same number of people as throughout the entirety of last year. On one day alone, 2,000 arrived – another record in its own right.

At the end of July, the official estimate for the total number of asylum seekers was hovering around the 74,000 mark. It now believes the number will be closer to 190,000.

For Sweden, with a population of 9.8million, that is a population increase of almost two per cent. The equivalent in the UK would be adding more than a million people to the population, or six million extra people in the U.S.

The result is the country cannot house all those arriving, with the government’s Migration Board saying it needs another 45,000 homes to meet demand.

We have a situation where people are forced to sleep in tents outside the Migration Boards offices, and sleeping in their receptions,’ says Mikael Hvinlund, the Swedish Migration Board’s director of communications.

‘And we have a situation where the Migration Board no longer is able to provide shelter to the applicants.

‘At our ferry terminals and train stations unaccompanied children disappear every day, it’s not fair to either us or them.’

There is no longer space in the cities, so officials are turning to the more remote villages like Tärnsjö.

The decision hasn’t always been popular with residents or migrants.

And among its number are those prepared to go a step further than leaflets and referendums to ‘reclaim’ their country. 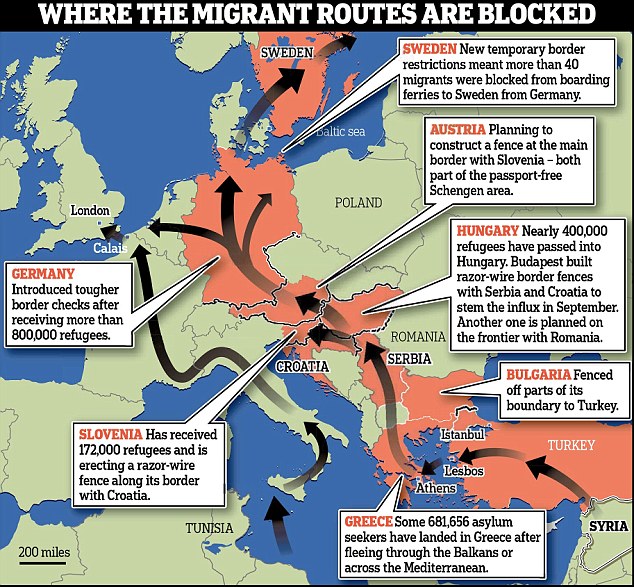 Explosives Uncovered In Cairo Airport; Parcels Headed For US