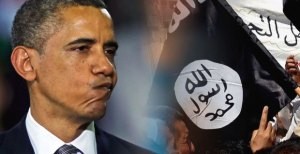 By John W. Lillpop
When it comes to combatting ISIS and global Jihad, Barack Hussein Obama prefers to devote copious amounts of time, energy and intelligence in defense of his legacy as a Nobel Peace prize recipient, rather function as the world leader against 6th century savages and barbarians, AKA radical Islamic extremists.

Deployment of such a meager force must amuse, and simultaneously offend, macho JV terrorists who work tirelessly to promote ISIS as a brutal, unrelenting, world-class threat to all life, present and future, on earth.

Nearly as infantile as Obama’s “Less than 50” strategy is the hair-brained notion that the Climate Change Conference in Paris can be parlayed into a “powerful rebuke” against Jihadists who routinely lop off heads and burn opponents alive in their righteous vendetta against infidels, waged in the Holy name of Allah!

“I will be joining President Hollande and world leaders in Paris for the global climate conference,” Obama said Tuesday during a joint news conference with French President Francois Hollande. “What a powerful rebuke to the terrorists it will be when the world stands as one and shows that we will not be deterred from building a better future for our children.”
Although Obama did not include address details in his public announcement, it is rumored that the revised Obama Strategy will include other aggressive actions designed to befuddle and confuse ISIS, including 1) immediate release of “more than 50” GITMO detainees to nations that agree not to use waterboarding and other harsh measures, and 2) Issuance of Executive Orders to authorize relocating an additional 50,000 Syrian refugees into America.

The big question: Will the Climate Change Conference and release of GITMO detainees and admission of more Syrian Refugees be enough of a “powerful rebuke” to turn the tide in the war on terror?

Or perhaps Obama’s antics will lull ISIS into uncontrollable fits of hysterical laughter that will render the heathen lovable stud muffins, no longer enemies of civilization, thereby confirming the validity of the Obama Nobel Peace prize fiasco?

Residents at war with migrants in once quiet Swedish village

Locals and refugees have been fighting in Tärnsjö, 150km from Stockholm Tensions so bad young migrant children are given a...