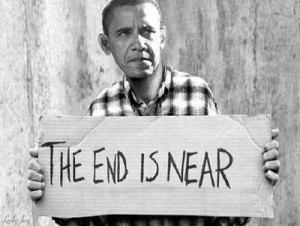 Barack Obama, unable to intelligently rebut Republican concerns about the ISIS threat to place terrorists among Syrian refugees brought into America, resorted to simple-minded, nasty rhetoric against the GOP.

President Barack Obama lashed out Wednesday at Republicans who insist on barring Syrian refugees from entering the U.S., deeming their words offensive and insisting “it needs to stop.”
“Apparently they’re scared of widows and orphans coming into the United States of America,” Obama said.

Mocking GOP leaders for thinking they’re tough, Obama said overblown rhetoric from Republicans could be a potent recruitment tool for the Islamic State group. He insisted the U.S. process for screening refugees for possible entry into the U.S. is rigorous and said the U.S. doesn’t make good decisions “based on hysteria” or exaggerated risk.

“We are not well served when in response to a terrorist attack we descend into fear and panic,” the president said.”

As it turns out, Obama’s bitter words were on a par with the “If you like your doctor, you can keep your doctor” lies repeatedly uttered to sell Obamacare to naïve voters and gullible Democrat politicians who should have known better.

This most recent Obama lie was exposed as such in figures released by the US State department about the actual admissions to the US since the November 13 terrorist attack in Paris.

Since the Paris terror attacks on November 13, the State Department has admitted 132 Syrian refugees into the United States, and all 132 are Sunni Muslims.

No Christian, Druze, Shi’ite, Alawite, or member of any other religious minority in Syria has been admitted over that period, according to data from the State Department Refugee Processing Center.

The Paris terror attacks, which killed 130 people and were claimed by Islamic State of Iraq and Syria (ISIS/ISIL), brought fresh scrutiny onto the issue of refugees from the Syrian conflict, amid concerns the terrorist group was seeking to infiltrate Western countries through refugee settlement programs.

The Refugee Processing Center admission figures since the attacks in Paris continue a trend evident since the start of the current fiscal year, on October 1. President Obama plans to resettle 10,000 Syrian refugees in the U.S. during fiscal year 2016.
Of the total 2,296 Syrian refugees admitted since March 2011, 633 (27.5 percent) are men aged between 14 and 50.
Therefore, more than one-quarter of the Syrian refugees allowed entry into the U.S. since the conflict began are men aged 14-50, and the vast majority of them are Sunni Muslim.”

Once again, the words of MIT Professor Jonathan Guber who attributed passage of ObamaCare to the lack of policy transparency and the “stupidity of the American public” ring hauntingly true in the debate over Syrian refugees.

The big question: How many American lives will be destroyed as a result of Obama’s blatant lies about the dangers of admitting Syrian refugees?

Only days ago, in response to complaints from HonestReporting and its subscribers, the Daily Mail’s Mail Online site amended a...