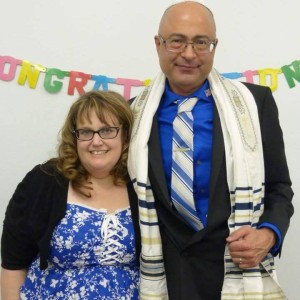 One of the victims of the San Bernardino shooting was identified on Thursday as a Messianic Jew who had a heated discussion with the shooter about Islam weeks before the attack.

The details came to light as investigators tried to determine whether the rampage that left 14 people dead was terrorism, a workplace grudge or some combination.

Nicholas Thalasinos, 52, passionately defended Israel, and actively debated religion in online forums and in person, his friends said. Only two weeks ago, Thalasinos was having a heated on-the-job discussion about the nature of Islam with Syed Rizwan Farook, his fellow restaurant inspector and the man police identified as the shooter.

Thalasinos’ friend, Kuuleme Stephens, told The Associated Press that she happened to call him while he was working with Farook, and that he brought her into their debate, loudly declaring that Farook “doesn’t agree that Islam is not a peaceful religion.” She heard Farook counter that Americans don’t understand Islam, and Thalasinos responded by saying “I don’t know how to talk with him,” she said.

Stephens said she didn’t sense any pending violence at the time, and it is not clear if their debates factored in the attack. Stephens said Thalasinos did not believe his co-worker would ever turn violent.

However, Stephens said his grieving wife told her later Thursday to tell the media that she now “believes her husband was martyred for his faith and beliefs.” It wasn’t immediately clear why Jennifer Thalasinos came to that conclusion.

Earlier Thursday, the victim’s wife told the LA Times that she was unaware of any friction between her husband and Farook.

“They got along,” she said. “As far as I know, [Syed] got along with everybody. That’s what’s so shocking.”

Nicholas and Jennifer Thalasinos had recently renewed their marriage vows, and they appeared together frequently on his Facebook page.

“He was a wonderful person,” said Joey Shimoni, another friend. “A great husband and just a sweet soul.”

Farook, a 28-year-old US citizen, and his wife, Tashfeen Malik, 27, a Pakistani national who was in the United States on a K1 (fiancee) visa carried out Wednesday’s rampage at a holiday party at the California center. They were killed in a shootout with police hours after the attack.

Farook and Malik had a six-month-old baby that they left with Farook’s mother before the shooting, according to a relative.

Is America Still a “Soft Power?”

The United States’ (US) reputation and status within the international community has taken a beating over the past decade and...