OPEN borders in Europe to be scrapped after it was revealed fugitive Paris terror attacker, Salah Abdeslam, crossed up to six European borders to escape to Syria. 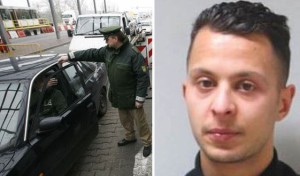 Europe’s most wanted man is now in hiding in Syria after slipping through the net at six border crossings, according to intelligence sources.

The Muslim terrorist is still on the run despite numerous raids and hundreds of arrests in both France and Belgium following the Paris attacks which killed 130 people.

Soon after the attacks it was revealed his car was stopped by border forces at the Belgian border, but he was allowed to continue on with his journey.

It puts the European Union’s fundamental value of freedom of movement under intense strain, with many countries already installing fences at borders to stop illegal immigrants passing through their nations.

Under what is known as the Schengen Agreement, the EU’s 400million residents and many non-EU nationals are allowed to travel freely across the continent, without the need to show any ID or wait in long queues whenever they cross a border.

French authorities have revealed that many of the Paris attackers were EU nationals, who were allowed to travel back and forth between Europe and ISIS-controlled areas in Syria on a number of occasions.

Politicians across the EU have claimed terrorists could be hiding among the hundreds of Syrian refugees entering Europe on a daily basis, and have called for an immediate halt to the continent’s refugee program.

The end of the Schengen Agreement, though, could have serious repercussions for the European economy.

The cost of doing business would be higher. Holland’s haulage trade association said waiting for an hour at a border crossing would cost its members an extra £453million a year.

Trade between countries would also suffer. According to official studies when two countries are part of the Schengen area, their trade increases by a total of 0.1% a year.

European Commission President Jean-Calude Junker has urged European leaders to not give in to hysteria. Mr Junker has called for a Europe-wide border and a coast guard defence system and said that it should not be up to individual member states to secure their borders.

Mainstream media reporters don’t even need to show up for work. They can file their stories beforehand. Robert Spencer The...