Republican presidential candidate Donald Trump revealed in an interview Thursday that forcing peace talks on Israel will head his priorities if elected – and that the responsibility for the lack of peace lies on the Jewish state, not the Palestinian Authority. 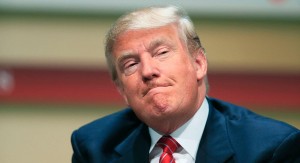 Ahead of his trip to Israel this month, Republican presidential candidate Donald Trump revealed in an interview Thursday that forcing peace talks on Israel will head his priorities if elected – and that the onus for the lack of peace lies on the Jewish state, not the Palestinian Authority (PA).

“I have a real question as to whether or not both sides want to make it,” Trump told The Associated Press, clarifying that he has more concerns regarding “one side in particular.”

“A lot will have to do with Israel and whether or not Israel wants to make the deal – whether or not Israel’s willing to sacrifice certain things,” Trump said. “They may not be, and I understand that, and I’m OK with that. But then you’re just not going to have a deal.”

Trump’s focus on Israel may strike some as ironic, given that the state is currently embroiled in an Arab terror wave that PA Chairman Mahmoud Abbas has actively encouraged, recently calling the murder of Jews “peaceful.”

The real estate guru promised: “if I win, I’ll let you know six months from the time I take office” whether or not a peace deal is possible.

Trump’s gung ho approach to starting up peace talks may raise concerns, given how they echo US President Barack Obama’s insistence on addressing the issue. US Secretary of State John Kerry forced through nine-month-long talks starting in late 2013, that the PA torpedoed in April 2014 when it signed a unity deal with Hamas. The talks were accompanied by an upswing in terror attacks.

“You know, I’m going to be probably going over there pretty soon and I want to see him, I want to see other people, I want to get some ideas on it,” said Trump, who claimed he was a “big, big fan” of Israel.

According to the businessman, the only way to solve the Israel-Palestinian issue is “if you had a real dealmaker, somebody that knew what he or she is doing. I’ll be able to tell in one sit-down meeting with the real leaders.”

While avoiding specifics about whether the PA’s demands are legitimate, Trump called Israeli construction in Judea and Samaria a “huge sticking point” in talks.

Asked if his goal is a two-state solution, by which Israel would be divided to create a “Palestine,” he said, “well, I’m not going to even say that.”

But he expressed his enthusiasm at the prospect of making a peace deal, saying, “if you can make that deal, you can make any deal. It’s probably the toughest deal to make.”

Regarding the prospect of peace, In late October PA Chairman Mahmoud Abbas said all of Israel is “the occupation,” showing his intentions to conquer the entire state, and last month he revealed for the first time that he rejected the offer of a Palestinian state back in 2008.

Abbas, whose term in office officially ended in January 2009, gave credence in June to calls by Jewish nationalists arguing that a Palestinian state should be set up in Jordan, when he called Jordanian and Palestinian Arabs “one people living in two states.”

When It Comes to Syrian Refugees, Muslim Leaders Opt for Common Sense over PC!

By John W. Lillpop To the genteel American woman who declined to call police about the suspicious behavior of several...