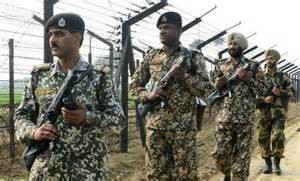 by Ezequiel Doiny
Globalsecurity.org describes the history of the India-Pakistan partition of 1947.”Mohammad Ali Jinnah, a Western-educated Muslim lawyer, persuaded the participants at the annual Muslim League session in Lahore in 1940 to adopt what later came to be known as the Pakistan Resolution, demanding the division of India into two separate sovereign states, one Muslim, the other Hindu…(1)

On June 3, 1947, Mountbatten, the viceroy (1947) and governor-general (1947-48), announced plans for partition of the British Indian Empire into the nations of India and Pakistan, which itself was divided into east and west wings on either side of India. The June 3, 1947 Partition Plan was prepared by Mountbatten in consultation with the British Government. It was based on a fundamental principle that transfer of power
should take place according to the wishes of the people. The principle of partition was specified in the plan : The all Muslim majority areas were to constitute part of Pakistan and similarly the Hindu majority areas were to go to India…(2)

At midnight, on August 15, 1947, India and Pakistan strode to freedom. The British could have set a deadline for the accession of all princely states before 14 August 1947 but for some odd reasons they opted to avoid setting of such a date. The division of the Indian subcontinent involved the partition of two large provinces of Punjab and Bengal. Nobody expected the kind of population exchange that took place once London signaled its intention to leave its Indian Empire in the hands of the two successor states. What followed was “ethnic cleansing” – a term that was to gain currency later in the 20th century…Partition unleashed untold misery and loss of lives and property as millions of Hindu and Muslim refugees fled either Pakistan or India. The violence in 1947 was exceptionally brutal and large in scale; but the underlying attitudes had long been in the making. Families were torn apart in a population exchange that uprooted more than 14 million people during the months after independence. By one account, over 8 million refugees poured across borders to regions completely foreign to them, with other accounts state that about 7 million people migrated to Pakistan from India and vice-versa. By another estimate, Partition resulted in the forced movement of 20 million people (Hindus and Sikhs to India and Muslims to Pakistan). Most estimates of the numbers of people who crossed the boundaries between India and Pakistan in 1947 range between 10 and 12 million.(3)”

In 2002 beliefnet reported that Hindu-Muslim violence still continued in India. “Police shot four people to death Tuesday while trying to disperse mobs and halt looting in two towns in India’s Gujarat state, beset by three weeks of religious violence that has killed 718 people.

Two people were killed and five injured when police fired on rioters in two Muslim areas in the town of Bharuch, said local official Anju Sharma. He added that a curfew had been imposed on parts of the town 100 miles south of Ahmadabad, the state’s largest city.

In the town of Modasa, there was widespread arson and looting and “two persons have been killed in police firing,” said police superintendent Nitiraj Solanki at the district headquarters in Sabarkantha. “We are still taking stock of the situation,” Solanki said, adding that several shops were burned.

It was unclear whether the dead were Hindus or Muslims. Most of the dead in recent weeks have been Muslims killed by groups of Hindus.

The violence in Gujarat began Feb. 27 when a Muslim crowd burned a train car carrying Hindu activists, killing 58 people. The army has been called in to help police restore order, but new incidents of Hindu-Muslim violence have occurred almost daily.”(4)

On September 2014 Reuters reported “Police in western India have arrested 140 people after two men were stabbed during violence between Hindus and Muslims that left more than a dozen injured and was triggered by an image posted on Facebook, officials said on Monday..

…Trouble was sparked by an image widely distributed on social media website Facebook that some Muslims considered offensive to Islam, said a senior administration official in the city.

In Case You Missed It:  Guardian Cuts Out One Key Fact About Annexation

India has a dark history of religious violence, especially between the Hindu majority and Muslims, who account for more than 150 million people, making India the world’s third most populous Muslim nation.”(5)

Lucian Pye wrote in Foreign Affairs a Book Review for Sumit Ganguly’s “Conflict Unending: India-Pakistan Tensions Since 1947”. “Since gaining independence in 1947, India and Pakistan have fought four wars and endured several crises. The recent evolution of Indian and Pakistani nuclear capabilities has led commentators to brand the subcontinent “the most dangerous place on earth.” (6)

Instead of bringing peace, the India-Pakistan partition of 1947 made the situation worse: While Pakistan became an Islamic State, India became a Secular State with one of the world’s largest Muslim populations where the clashes between Hindus and Muslims continue to be routine. After the partition there were 14 million refugees, 4 wars and a dangerous nuclear race.

The India-Pakistan partition made the conflict more dangerous, the creation of a Palestinian State in the West Bank will intensify the Arab-Israeli conflict.

The Palestinian Media Watch translated an interview by one of Hamas founders Mahmoud al-Zahar to the Palestinian newspaper Al-Ayyam in which he said “transfer what it has [in Gaza] or just a small part of it to the West Bank, we would be able to settle the battle of the ‘final promise [to destroy Israel] with a speed that no one can imagine…[Some] have said Hamas wants to create an Islamic emirate in Gaza. We won’t do that, but we will build an Islamic state in Palestine, all of Palestine…”

In Case You Missed It:  Is the US Putting Brakes on Israeli Annexation?

There are other solutions to the Arab-Israeli conflict that will not endanger Israel’s existence. Since the EU believes the conflict can be solved with a UNSC resolution, why not submit one declaring that the Palestinians already have a State in Jordan? Jordan was created in land from British Mandate Palestine, most of the Jordanian population is Palestinian. Jordan must also be part of the solution.

7 Reasons You Should Buy a Gun After San Bernardino