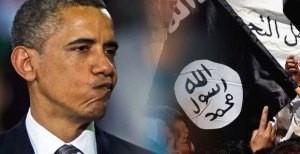 President Barack Obama has NOT aged well since occupying the Oval Office at 1600 Pennsylvania Avenue seven years ago. His hair has greyed dramatically, to the point where black roots are now in the minority among the follicles on his Marxist crown.

That vibrant, roaring oratory which at one time ran thrills up and down the leg of a gullible (soon to be 70-something left-wing journalist), has been replaced by meandering, halting double talk, noteworthy only for the overly abundant Hmm and Ah pauses which, when added to the of scarcity of truth and transparency, make his public pronouncements all the more incomprehensible!

Furthermore, the substance of what this President has to say publicly is increasingly vague, some would even say nonsensical.

An example is Obama’s recent victory speech in which he joyfully predicated that the UN Climate conference in Paris would send a “powerful rebuke” to terrorists, including the contained, on the run, JV vermin known as ISIS.
As reported:

“In a speech alongside French President François Hollande, President Barack Obama said that the upcoming United Nations Climate Change Conference held in Paris would be a “powerful rebuke” to (terrorists) ISIS.
“I want to salute the people of Paris for showing the world how to stay strong in the face of terrorism,” Obama said. “Even as they grieve, Parisians have begun returning to their cafes, riding the metro and going to stadiums to cheer for their teams.”

There is no evidence that Obama’s arrogant taunting of fellow Muslims had anything whatsoever to do with the carnage that befell San Bernardino later in the week, and which resulted in the brutal slaying of 14 and life-threatening injuries to 21 Christmas revelers at the hands of ISIS sympathizer(and perhaps more!) Tashfeen Malik and her equally demented husband, Syed Farook.

Still, Obama needs to explain how his “powerful rebuke” became instead a rallying cry for medieval Jihad waged against innocent folks in Southern California?

by Ezequiel DoinyThe UN applies double standards by backing Arab false claims that Jews are changing the status quo in...