Armed police are hunting four suspects wanted over the Paris massacre near the United Nations headquarters in Switzerland. 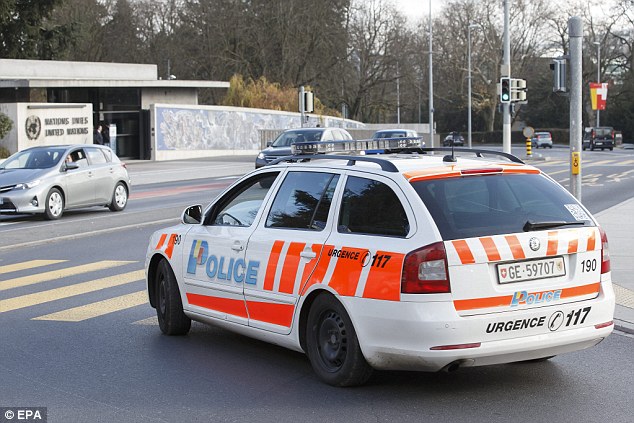 UN security guards are stationed with MP5 sub-machine guns at entry points for cars, a highly unusual measure at the sprawling complex.

One guard said Swiss authorities were searching for ‘four guys’ believed to be in the area.

‘It is maximum alert,’ said a second guard at the European headquarters of the world body.

Geneva officials raised the level of alert and said police were ‘actively searching’ for suspects identified by Swiss federal authorities in connection with the Paris attacks last month.

It added: ‘The Geneva police, on the basis of this information, have increased their level of vigilance and reinforced the number of police agents on the ground.’

‘We have gone from a vague threat to a specific one,’ Emmanuelle Lo Verso, a spokeswoman for the security department, said.

She declined to comment on news reports indicating that either four or six suspects were being sought or say whether French or other foreign authorities had pointed out the suspects.

The shooting and bomb attacks by ISIS militants killed 130 people in the French capital on November 13.

Police in several European countries are still searching for individuals believed to have been involved in the attacks or in their planning.

It was not immediately clear from the Geneva statement, however, whether the suspects were directly linked to the Paris attacks.

A Geneva spokeswoman said she had no further comment.

The prime suspect in the attacks, Salah Abdeslam, has been on the run since being stopped by police on the Belgian border and then let go a day after the massacre.

Police are also hunting fellow suspect Mohammed Abrini, who was seen driving towards the Belgian border with Abdeslam.

A Swiss police officer on patrol in front of the Russian mission due to a high level of alert in Geneva.

The Belgian Federal Prosecutor’s office said the men, carrying bogus IDs with the names of Samir Bouzid and Soufiane Kayal, were travelling in a Mercedes with Abdeslam, when the car was checked on September 9 at the Hungarian-Austrian border.

The Kayal identity was used to rent a house in the Belgian town of Auvelais that authorities searched as a possible site for making the suicide bombs used in the November 13 attacks in Paris.

Belgian authorities said the false ID in the name of Bouzid was used at a Western Union office in the Brussels area at about 6pm on November 17.

Boulhacen and Abaaoud died on November 18 when French police stormed their hideout in a Paris suburb.

Forget the debates: Simple reasons a Republican will likely win in 2016

Elections are not mysterious events subject to the whimsy of unpredictable candidates and voters. They’re actually highly predictable, with a...