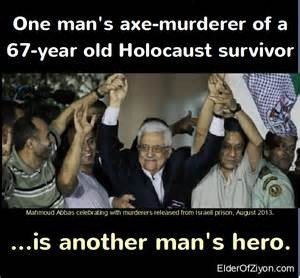 “By calling terrorists “lone wolves” the media is clearing the PA from responsibility and preventing the US Congress from taking measures such as cutting US aid which could stop terrorism and prevent further attacks.”

On November 6 the BBC Watch reported that “Over the past few weeks BBC audiences have been repeatedly told that the current wave of terrorism in Israel is characterized by “lone wolf attacks”. For example:

“This amateur video was filmed in the Old City last Saturday. The distant screams are from an Israeli woman whose husband had just been killed in a lone wolf knife attack.” (Orla Guerin, BBC television news, October 9th 2015)

“It is proving a struggle to prevent the sporadic lone wolf attacks by young Palestinians. These have been motivated by deep anger over access to al-Aqsa Mosque and the current political situation. There is a danger that a heavy-handed Israeli police response could exacerbate the situation.” (Yolande Knell, BBC News website, October 9th 2015)

That description conceals the links of some of the perpetrators of recent attacks to terrorist groups such as Hamas and the Palestinian Islamic Jihad. It also ignores the fact that whilst some of the individual terrorists may indeed have operated outside an organised command structure, they did not act within a vacuum.

A very interesting essay titled “What Do Palestinians Want?” by Daniel Polisar at Mosaic magazine provides insight into the backdrop to the current wave of terror.

“Absent almost entirely from this discussion has been any attempt to understand the perspective of everyday Palestinians. Yet it is precisely the climate of public opinion that shapes and in turn is shaped by the declarations of Palestinian leaders, and that creates the atmosphere in which young people choose whether to wake up in the morning, pull a knife from the family kitchen, and go out in search of martyrdom. Whether commentators are ignoring the views of mainstream Palestinians out of a mistaken belief that public opinion does not matter in dictatorships, or out of a dismissive sense that they are powerless pawns whose fate is decided by their leaders, Israel, or regional and world powers, the omission is both patronizing and likely to lead to significant misunderstandings of what is happening. In this essay I aim to fill the lacuna by addressing what Palestinians think both about violence against Israelis and about the core issues that supply its context and justification. […]

Though they may be lone wolves in the technical sense of not belonging to an organizational command structure, they are anything but alone within their communities. To the contrary, they are surrounded by people who share many of their core beliefs, who justify the attacks they are carrying out, who see their actions as potentially valuable in furthering Palestinian goals, and who can be counted on to venerate them and their families.”

The full essay …can be found here.

Behind the BBC’s ‘lone wolf’ portrayal of terrorism in Israel

On September Benyamin Korn wrote in The Algemeiner that “There was an interesting twist to news media coverage of the most recent Palestinian terrorist attacks against Israelis.

The stabbings, car-rammings and other Arab attacks were “isolated” incidents, the Associated Press declared. New York Times correspondent Diaa Hadid emphasized, in the second sentence of a recent dispatch, that the attackers “appear to be acting alone and without the backing or instruction of any organization.”

Why are the major news media, and other Palestinian sympathizers, so intent on presenting the attackers as lone wolves?

…it’s a way of absolving the Palestinian Authority of any responsibility. Supporters of the Palestinian cause are anxious to shield the PA from criticism. Evidence of P.A. support of terrorism undermines the chances of bringing about the creation of a Palestinian state. It could endanger U.S. aid to the Palestinians. It could drive Israeli voters to support parties that are strongly anti-terrorist. Hence the P.A.’s image must be protected at all costs.

…Israelis might draw a very different lesson from these latest “lone wolf” attacks.

They might legitimately conclude that there’s a reason why an individual Palestinian, even without organizational backing, might choose to stab a Jew at random or slam his speeding car into a crowd of Jews waiting at a bus stop.

It might have something to do with what they are taught in schools, what they see on television and what is being preached in their mosques. The textbooks in Palestinian schools teach children that Jews are evil and Israel must be destroyed. Programs on official P.A. TV portray mass murderers as heroes and martyrs who should be emulated. The imams in their mosques accuse Jews of desecrating the Muslim religious sites.

In short, the “lone wolves” are not really so “alone” after all. They are the product of a culture of hatred and violence that the P.A. sponsors and nurtures. “It Takes a Village” to raise a child, according to Hillary Clinton’s famous children’s book. The Palestinian Authority’s village is raising a generation of killers.”

Just this week, Abbas was revealed to have made shocking statements two weeks ago, when he said that the murder of dozens of Israelis and the wounding of hundreds others is part of a “peaceful uprising.”

In Case You Missed It:  Orange County Dr. Jeff Barke Breaks His Silence on COVID 19

The call for a “peaceful” terror wave included statements by Abbas in early September, in which he blessed every drop of blood shed in Jerusalem “for Allah” and called to stop “filthy” Jews from visiting the Temple Mount.

Abbas rejects the two state solution. Lt. Col. (ret) Jonathan Halevi explained in the Jerusalem Center for Public Affairs that Abbas supports a phased plan for Israel’s destruction “…Beneath the moderate guise that Abbas tries to project is a Palestinian leader who unreservedly supports terror and demands to implement what the Palestinians call the “right of return.”

…What the Palestinians mean by “right of return” according to Resolution 194 and the Arab Peace Initiative is simple enough and was ratified as an official law by the Palestinian parliament with Abbas’s approval.

According to the 2008 Law of the Right of Return of the Palestinian Refugees:

“The right of return of the Palestinian refugees to their homes and property, while receiving compensation for their suffering, is an inalienable and enshrined right that cannot be compromised, replaced, reconsidered, interpreted otherwise, or subjected to a referendum.

The right of return is natural, personal, collective, civil, political, passed on from father to son; it is not nullified by the passage of time or by the signing of any agreement and it cannot be abolished or waived in any way.

The Palestinian refugees shall not be resettled or displaced as an alternative to the right of return.

Anyone who violates the provisions of this Act shall be guilty of the crime of treason and will be subject to all criminal and civil penalties prescribed for this crime.

Anything that contradicts this law is considered null and void, and any legislation or agreement that will derogate from the right of return or contradict the provisions of this Act shall be deemed null and void.”

In other words, even after an Israeli withdrawal to 1967 borders and the establishment of a fully sovereign Palestinian state, the conflict will remain unchanged and Palestine will demand the “return” to Israel of the millions of refugees and their descendants. The Palestinian demand for “return” entails the transfer of millions of Jews from their homes and the end of the state of Israel…”

In Case You Missed It:  7 Highlights From National Coronavirus Recovery Panel’s New Recommendations

The Palestinian Media Watch translated an interview by one of Hamas founders Mahmoud al-Zahar to the Palestinian newspaper Al-Ayyam in which he said “transfer what it has [in Gaza] or just a small part of it to the West Bank, we would be able to settle the battle of the final promise [to destroy Israel] with a speed that no one can imagine…[Some] have said Hamas wants to create an Islamic emirate in Gaza. We won’t do that, but we will build an Islamic state in Palestine, all of Palestine…”

If a Palestinian State is created in the West Bank Hamas will attack Israel with missiles from the West Bank as it does from Gaza endangering the lives of thousands of Israelis, leading to war and making the situation much worse.

Despite Abbas and Hamas rejection of the two state solution and their commitment to the destruction of Israel, Obama blames Israel for the failure of negotiations and threatened to abandon Israel in the UNSC. On March 2015 Newsmax reported that “The White House on Wednesday suggested it could reverse its decades-old policy of using its veto in the United Nations Security Council to protect Israel. It could refuse to veto resolutions related to the Palestinians or introduce a measure of its own, The Wall Street Journal reported. The U.S. could also lend its support to a two-state solution based on Israel’s 1967 borders, a senior White House official told The New York Times.”

Obama is in a rush to pass a UNSC resolution imposing a timetable for an Israeli withdrawal from the West Bank before his time in office ends. He knows that the next administration will not be willing to concede this to the Palestinians without taking into consideration Israel’s security needs.

The media portrays the terrorists as “Lone Wolves” in order to protect the Palestinan Authority from criticism and hide evidence of their support for terror. They clear the Palestinan Authority of any responsibility because they support the Palestinian cause and do want to undermine the chances of creating a Palestinian state. By calling terrorists “lone wolves” the media is clearing the PA from responsibility and preventing the US Congress from taking measures such as cutting US aid which could stop terrorism and prevent further attacks.