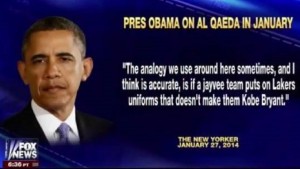 President Obama’s fairyland distortion of the existential dangers posed by extreme elements within Islam have caused The One to consistently under-estimate the abilities, resources, and influence of ISIS and other Muslim terrorists dedicated to killing as many American and western populations as possible.

The One’s immature judgment has been made brutally obvious by ill-advised assertions which hold that ISIS is of ‘JV’ caliber, is contained, and other equally absurd distortions which seek to reassure Americans that the president has a winning strategy and the will to defeat ISIS, neither of which has the slightest basis in truth.

The notion that ISIS is ‘JV’ or a second-rate rag-tag team was turned into another Obama Folly with news that the organization now is able to create false passports.

With the U.S. and other countries on high alert for ISIS attacks, American authorities are warning the terror group’s followers may have infiltrated American borders with authentic-looking passports ISIS has printed itself with its own machines, according to an intelligence report obtained by ABC News.

The 17-page Homeland Security Investigations (HSI) Intelligence Report, issued to law enforcement last week, says ISIS likely has been able to print legitimate-looking Syrian passports since taking over the city of Deir ez-Zour last summer, home to a passport office with “boxes of blank passports” and a passport printing machine. Another passport office was located in Raqqa, Syria, which has long been ISIS’s de facto capital.

“Since more than 17 months [have] passed since Raqqa and Deir ez-Zour fell to ISIS, it is possible that individuals from Syria with passports ‘issued’ in these ISIS controlled cities or who had passport blanks, may have traveled to the U.S.,” the report says.

The report notes that the primary source for the information was rated at “moderate confidence,” the second-highest rating given for source assessments. Testifying before lawmakers Wednesday, FBI Director James Comey first publicly revealed the nation’s top security officials’ very real anxiety over the problem.

“The intelligence community is concerned that they [ISIS] have the ability, the capability to manufacture fraudulent passports, which is a concern in any setting,” Comey said.

Fake Syrian passports have already been discovered in Europe, most notably two used by suicide bombers in the horrific terrorist attack on Paris last month. The two men are believed to have slipped into Europe with a flood of Syrian refugees fleeing the violence in their homeland.

According to the source that provided the passport information to homeland security officials, Syria is awash in fake documents.

The report included one example in which law enforcement officials said that a Syrian passport discovered in Turkey was printed with a designator number indicating it had been printed in an ISIS-controlled area earlier this year.

Recently international news outlets have reported that their journalists have been able to purchase fake Syrian passports for a few thousand dollars.

The DHS report says it is unclear what state the “blank” passports stolen from Deir ez-Zour were in or if they were completely blank. It also notes that the “whereabouts of the passport machine(s) remain fluid,” since the source said they are portable. As of April, the U.S. Department of Defense marked Deir ez-Zour as a “contested” city on its public map of Syria (PDF), versus ISIS-dominated for Raqqa.

The HSI report’s last page contains a warning: “If ISIS ability to produce passports is not controlled, their operations will continue to increase and expand outside of their operational controlled areas.”

Earth to the President: ‘Ability to increase and expand outside of their operational controlled areas,’ does not resonate well with assertions, regardless of how well-meaning, that ISIS is JV or contained!

In Case You Missed It:  INSANELY VULNERABLE: If Russia cuts off supply of enriched uranium to US power companies, America’s nuclear energy reactors will close within a year
Posted in Freedoms.