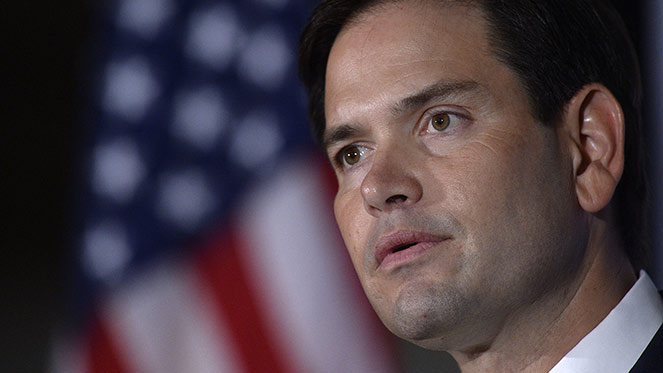 After claiming a special expertise in foreign policy, GOP presidential wannabe Marco Rubio finds himself under fire because of his neoconservative tendencies. He’s responded in the usual way for someone whose policies would keep America perpetually at war: accuse his critics of being “isolationists.”

Trying to defend his record of supporting such disastrous misadventures as Iraq and Libya, he denounced unnamed foes seeking “to derail the postwar consensus about America’s role in the world.” This outrageous yet anonymous “they,” he added, “will never call themselves isolationists, but that is exactly what they are.”

Against Ted Cruz, the likely intended target, the claim obviously is nonsense. After all, Cruz recently proposed carpet-bombing the Islamic State. What Rubio unintentionally illustrated was the fact that “isolationist” today has been stripped of almost all meaning to become an all-purpose epithet. It is routinely used against dedicated non-interventionists and war-happy interventionists alike, irrespective of the facts.

Indeed, if “isolationist” means anything today, it simply is “you don’t want to intervene where I want to intervene.” Sen. Lindsey Graham could rev up his presidential campaign by accusing Sen. Rubio of being an isolationist for not proposing a large-scale ground operation against ISIL in Iraq and Syria. (Although the Florida Senator did come up with the truly wacky idea of sending Special Forces to Yemen.) Perhaps in the future Sen. Tom Cotton, the newest uber-hawk, will denounce Sen. John McCain, the traditional Neocon standard-bearer, for, say, not wanting to use nuclear weapons against both China and Russia.

There are no isolationists in America today, or at least any seriously involved in influencing foreign policy. Even the strongest critics of Rubio’s militarism tend to promote free trade, liberal immigration and international cooperation. That’s hardly “isolationism.” And most everyone is for at least some military action. The number of analysts who opposed social engineering in the Balkans, nation-building in Afghanistan, democracy-promotion in Iraq and humanitarian intervention in Libya would fill a Washington phone booth, if one could still be found.

Perhaps the greatest irony is how Rubio and his fellow neoconservatives parade as internationalists even as their policies disrupt the international order. Indeed, it is a curious internationalism which views itself as in full flower when the U.S. military is bombing, invading, and occupying other nations. The more people killed, the greater the evidence of American benevolence. In fact, the acts may be international, but the attitude is intensely national.

Moreover, Rubio’s form of internationalism operates like a workman with only a hammer: every problem looks like a nail. In this case, the first and usually only solution to foreign problems is military. Indeed, it seems that the mere availability of military action requires reliance on military action. Anything else—diplomacy, economic sanctions, even threatening future military action—is the worst form of “appeasement,” another meaningless yet all-purpose insult.

Certainly doing nothing is utterly inconceivable. No handing off the problem to those states with the greatest interest. In normal life, if people aren’t willing to pay for or do something affecting them, it’s a good indication that it isn’t worth the price. Not when it comes to a Rubioesque foreign policy. The refusal of other parties to solve issues of most interest to them is viewed as evidence that Washington must act because no problem anywhere can be left alone. To do so, to imagine that, say, a civil war in Syria is tragic, but mostly a matter for its neighbors, obviously is, yes . . . “isolationist”!

A better definition for isolationist would be someone who wants America to be isolated. The starting point would be military—no alliances, of course, but also no joint maneuvers, intelligence sharing, foreign training, base access, or cooperation of any other sort. There actually aren’t many of those people around, even among non-interventionists.

Next would be economic isolation, or autarchy. No imports, which in practice would mean few exports (you can’t wall off other nations’ products and expect them to welcome yours). It’s an ancient yet stupid economic policy held by few in America, even among protectionists, who at least make a pretense of targeting their “isolationist” preferences. Ironically, support for free trade may be highest among the small band of libertarians who most oppose military intervention.

Then there are people. Even Donald Trump is at most a selective isolationist in this regard, targeting Muslims, and for reasons other than an abstract desire for Americans to be alone. Much of the broader immigration debate is centered on low-skilled people coming from poorer nations, especially Mexico. The anti-immigration concerns may be inflated, even mistaken, but aren’t purely “isolationist.” There just aren’t many real isolationists even regarding immigration.

Who are the dread “isolationists” among the GOP aspirants that Rubio reviles? They don’t exist. While the other candidates may want to engage the world to greater or lesser degrees, none believes that America should stand aside, build a wall around its borders, and ignore the rest of world. None of them believes in an isolated America.

Thus, it would be more helpful if Rubio dropped the name-calling and participated in a serious debate over how the U.S. should engage the world. That should start with examining the catastrophic consequences of the military policies which he supported in Iraq and Libya. There’s no doubt that the impact has been disastrous. Is there any reason to believe his prescription of “more, sooner, longer” would have yielded better results?

Moreover, given his apparent determination to do something about the horrid Syrian civil war, it would be helpful if Rubio explained if there was a war anywhere he didn’t believe the United States had to get involve in and, if so, why? Millions died in the Congo in years of conflict during the 2000s. Was that America’s responsibility to resolve? How about Sudan, Burundi, Rwanda and Liberia? Or go back in the Middle East: should the Reagan administration have overcome its “isolationist” tendencies in staying out of the Iran-Iraq war and exiting Lebanon after the Marine Corps barracks bombing?

Indeed, Rubio might discuss whether he believes peace itself to be evidence of an “isolationist” policy. For instance, he declared: “I will use American power to oppose any violations of international waters, airspace, cyberspace or outer space.” Wow, any violations. He also promised to treat as a casus belli “the economic disruptions caused when one country invades another, as well as the chaos caused by disruptions in choke points such as the South China Sea or the Strait of Hormuz.” Does that mean America has to fight any war involving any trading partner?

When one contemplates the adverse consequences of this policy of perpetual intervention and war, one might start feeling some “isolationist” tendencies. For when it comes to Rubio, “isolationist” really means good old-fashioned common sense. Don’t go to war unless you have to. Don’t try to solve other people’s problems. Don’t turn small problems into bigger ones. Don’t risk your own people’s lives and money in misbegotten crusades abroad. Especially when none of those issues ever struck you as vital enough to impel you to serve in the military.

Far from highlighting Rubio’s qualifications for the presidency, his foreign policy views demonstrate a worldview which is both simplistic and dangerous. When coming from the Florida Senator, “isolationist” should be viewed as a compliment.

Doug Bandow is a Senior Fellow at the Cato Institute. A former Special Assistant to President Ronald Reagan, he is author of Foreign Follies: America’s New Global Empire.