Retired Navy Admiral James Stavridis had some chilling words to say about what might be coming across the U.S. southern border on Thursday. Asked by Sen. Kelly Ayotte if drug-smuggling networks could be used by terrorists to gain entry into the country, Stavridis said: 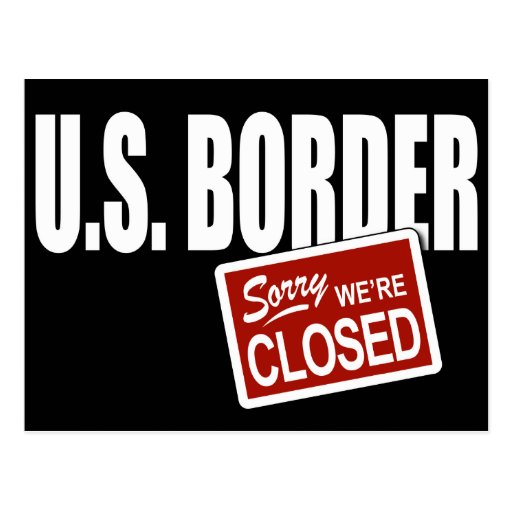 “Absolutely, it’s something we should be worried about. And I have called this before ‘convergence.’ And it is the convergence of these drug routes, which are extremely efficient, with the possibility of using them to move terrorists — or at the really dark end of the spectrum, weapons of mass destruction — along with the narcotics.”

Terrorists and weapons of mass destruction.

The next lawmaker who says we are a “nation of immigrants” should be impeached.

According to everyone with access to a printing press, Donald Trump’s proposal to temporarily ban Muslims from entering the United States is un-American and unconstitutional. Fine. How about this, then? How about we shut it down altogether? We need time to sort this out. We’ve got enough tired and poor right here in this country already. We don’t have the money to take care of our suffering military veterans, but somehow we have the money to give welfare to millions of illegal immigrants. We somehow have the money to relocate thousands of Syrians who can’t be bothered to fight for their own country. We even have the money to build special homeless shelters for transgenders.

But money to secure the border? Oh, no, that’s impossible.

Does anyone really believe that this country would be worse off if we went five years without letting in a single immigrant, illegal or otherwise? Can someone explain what, exactly, we would be losing? And if so, can they explain how nothing is lost when we abort a million American citizens a year? Can they pinpoint which American values are being upheld by Planned Parenthood?

What would happen if a nuclear bomb went off in New York City tomorrow, planted by Islamic terrorists? What actions would we take in the aftermath? Let’s take those actions now and skip the heartache and trauma. Our short attention span is getting to be a real liability. It’s somehow easier for us to remember slavery and Japanese internment camps than it is to remember 9/11. Let’s have the courage to live in the world as it is today, no matter how unpleasant that world might be.

One nation, under God, indivisible.

Does that sound like it describes 2015?s version of the United States?

There may be no straightforward ways to get back to that ideal, but it’s pretty damn easy to see that letting in millions and millions of people who are, at best, indifferent to our core values (and, at worst, actively hostile to them) is not one of them.

Iran: We infiltrated the Mossad

The semi-official Fars News Agency of Iran outdid itself on Tuesday, posting claims that Tehran's intelligence agents have infiltrated "those countries that...