The bigot in charge of Sam Club CEO Rosalind Brewer told CNN’s Poppy Harlow about meeting some suppliers, where she was upset that they were all white males. She didn’t like that, and it guided her decisions on dealing with them. 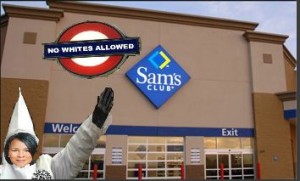 Brewer is a black female. Instead of simply being proud of her achievement that she apparently earned simply by being a conscientious worker, Brewer believes that others shouldn’t have to put in the effort. As she put it, she likes to ‘nudge’ Sam’s Club suppliers to get them to hire more token minorities. That’s better than challenging the black community (and other minority groups) to work hard and earn the good jobs.

Can liberals like Sam Clubs CEO Rosalind Brewer look past ones skin color, so far the answer is a big no.

It was more important to Ms. Brewer that a staff be racially and gender diverse rather than the best people be picked for their jobs. In response to Brewer’s outright racism, thousands of Americans have gone online to announce they are canceling their Sam’s Club memberships, and the controversy is spreading like wildfire.

Backlash is growing for the CEO of Sam’s Club after she discussed her dislike for dealing with White men on CNN.

As Top Right News reported Sunday, the company’s black, female CEO Rosalind Brewer planned to fire a supplier she met with because she was disgusted that his management staff had too many White males.

In response to Brewer’s outright racism, thousands of Americans have gone online to announce they are canceling their Sam’s Club memberships, and the controversy is spreading like wildfire.

So have Brewer’s bosses at WalMart backed the bigot down? Heck no…they’ve doubled down!

The president and CEO of WalMart Stores Inc., who owns Sam’s Club, Doug McMillon said the company supports Ms. Brewers racism and added that they ask their suppliers “to prioritize the talent and diversity of their sales teams.”

Since the story broke angry customers have called for a boycott of the company until such time as Brewer is fired, apologizes or the situation is otherwise rectified.

Naturally the left, who would be going out of its mind if a white male suggested an all black female executive team had to be diversified, cannot understand what all the anger is about.

Outrage raged online, with social analytics company TotalData estimating that 83% of Twitter respondents were against the company on this issue:

Due to Islamic terrorism entering a Southern California theme parks will now include metal detectors, with officials at Disneyland and...