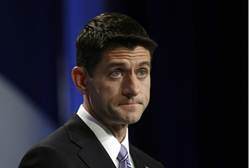 What a ghastly Christmas downer!

It started out so promising as the Ghost of Christmas past, John Boehner, was jettisoned out of Washington, money sacks stuffed with booty from voiceless, powerless taxpayers!

Even though Boehner’s departure cost the nation a pretty penny, we still held high hopes that conservative values would finally be allowed to prosper in the US Congress which, lest one forget, is actually controlled by alleged Republicans!

With Boehner’s departure, many saw a reason to celebrate! We the people DO MATTER, after all. With Boehner out of the Congress, perhaps the Republican party would commence being the opposition, rather than functioning as a rubber stamp for the Marxist tyranny of our failed messiah, AKA Barack Hussein Obama!

Our heightened spirits were quickly dashed, however, when the Paul Ryan spending bill was revealed. This disaster included:

Funding for Planned Parenthood; resettlement of illegal aliens and Syrian refugees, ObamaCare, Obama’s mangling of immigration law via Executive Orders, and on and on!

Paul Ryan may be a numbers “genius,” but when it comes to stopping Obama’s runaway tyranny, Ryan is completely out of his element.

Just who the hell is this RINO creature “speaking” for?

In Case You Missed It:  Inflation “Reduction” bill to unleash TAX TERRORISM upon the American people
Posted in Freedoms and tagged Congress, Speaker Paul Ryan.

Obama Admin Does not know whereabouts of 9,500 immigrants with visas revoked for terrorism

But no worries, terror spox Obama says no ‘specific’ terror threat to US, but calls for vigilance – he doesn’t...