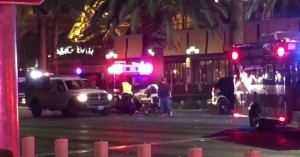 More than 20 people are reported to have fallen victim to a major accident near the luxurious Paris Hotel in Las Vegas, Nevada. Conflicting reports are coming from the scene, which has been cordoned off by police.

UPDATE: Police sources telling me more than 20 casualties after a vehicle drove up onto the sidewalk near @ParisVegas #TheStrip @News3LV

Media reports immediately appeared claiming there were more than 20 victims. However, it was not immediately clear if the victims were dead or alive, or in what condition. Local NBC reporter Gerard Ramalho cited police sources as saying that a vehicle had driven up onto a sidewalk and into a large group of people.

Witnesses told the channel that the driver was allegedly a woman who had a child in the vehicle. Reports are saying that she tried to flee the scene, but was detained by police and is currently undergoing sobriety test.

U/D: Unified Command now advising there is 33 patients from the auto vs crowd incident #lasvegas #breakingnews

Multiple ambulances rushed to the scene and the street is now illuminated by emergency lights. At least 33 people have been taken to the hospital, according to unconfirmed reports.

In Case You Missed It:  Washington Commanders Football Player Shot in Carjacking Attempt in Broad Daylight in DC
Posted in Terrorism and tagged murder, Nevada, United Socialist States of America.

EU ‘wiping out’ original population in favor of migrants

(RT)  The EU is deliberately bringing in as much immigration into Europe as possible in an effort to 'divide and...