Lily Tang Williams, the state chair of the Colorado Libertarian Party, posted a photo to Facebook featuring her AR-15 rifle and the American flag with a vow to never again be a “slave.” 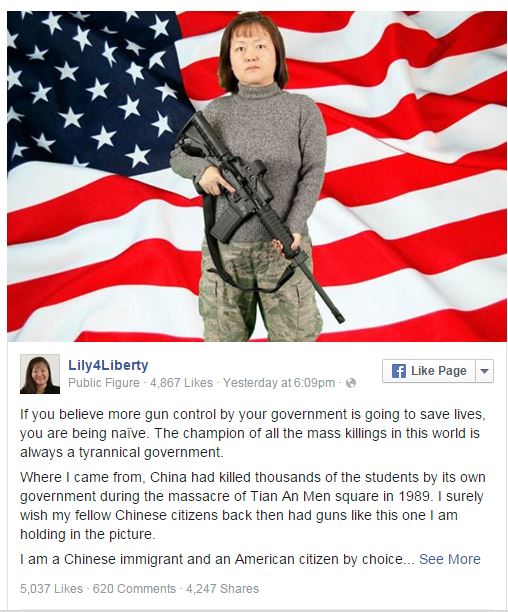 “I am a Chinese immigrant and an American citizen by choice. I once was a slave before and I will never be one again,” Williams wrote.

“If you believe more gun control by your government is going to save lives, you are being naïve. The champion of all the mass killings in this world is always a tyrannical government.”

Williams went on to point out the thousands of unarmed students killed during the Tienanmen square massacre, promising to defy the president and “his pen.”

“Where I came from, China had killed thousands of the students by its own government during the massacre of Tian An Men square in 1989. I surely wish my fellow Chinese citizens back then had guns like this one I am holding in the picture,” she wrote.

“I will always stand with my AR, no matter what my President signs with his pen.”

“Lily, you have seen what most Americans have only heard about. Plus, you became a citizen, and you are politically active and have chosen conservative alliances,” one Facebook user wrote. “You are more American then many born here.”

During a public address from the Oval Office Monday, President Obama labeled the executive actions as “consistent with the Second Amendment.”

In Case You Missed It:  Why Progressive Activists Want to Silence the Truth About Climate Change

Williams joined the Infowars Nightly News last February to tell of China’s corruption and the dangerous path she now sees the United States heading down.

Welcome to Ukraine – Now the ‘Somalia of Europe’

The startling reversals in Syria and Iraq now afford us our daily whiff of gunpowder and desperation, and Ukraine has been...