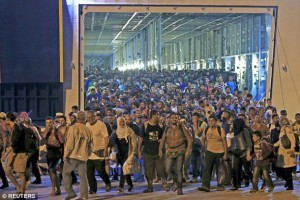 An experienced police officer has revealed that 14 of the 15 culprits arrested so far who were involved in the mass sexual molestation of women in Cologne on New Years Eve were newly arrived Syrian migrants.

In an interview with Express.de, the officer reveals that 15 men were arrested, of whom 14 were from Syria and one was from Afghanistan. The men had arrived in Germany within the last few days or weeks, according to the officer.

“14 were from Syria and one from Afghanistan. That’s the truth. Although it hurts,” said the officer.

A separate official confirmed to Express.de that this was accurate, according to the report.

Police initially claimed that the suspects were not newly arrived refugees, although quite how the men being supposedly ‘assimilated’ immigrants would be a better scenario makes little sense.

The identity of the culprits is now “under lock and key and secret,” according to the officer, suggesting that authorities are keen to keep the information under wraps.

Paramedics and emergency physicians who attended to the injured on the night could also confirm the identities of the men, according to the officer.

The officer also explained how he had, “young women weeping beside me, who wore no panties, after the crowd had spat at them.”

Police were overwhelmed and unable to protect the victims because sufficient forces were not dispatched to the scene, according to the officer, an account that is backed up by another eyewitness – a hotel bouncer who was working in the immediate vicinity of Cologne Cathedral.

Evidence of a police cover up is already unraveling. Authorities issued a press release on New Years Day claiming the previous night was “peaceful” and without incident. It took the German media days to report on the story, with top broadcaster ZDF later apologizing for the delay.

As we previously highlighted, German police have been accused of covering up crimes and sexual assaults committed by migrants so as not to “legitimize” critics of mass immigration.

Paul Ryan: Donald Trump or Ted Cruz would be a ‘far better president than Barack Obama’

House Speaker Paul D. Ryan says the country would “absolutely” be better off with Donald Trump or Ted Cruz as...