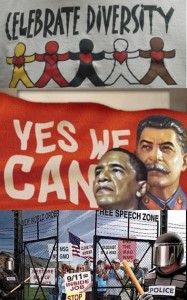 No nation is born multicultured. Multiculturalism is an unnatural as well as unhealthy condition that can only afflict states in national decline. A multicultural state carries in it’s geneses the seeds of eventual national destruction.

All multicultural nations will be found to be in a state of political, moral, economic and social decay. Greed and corruption will characterize the government coupled with oppressive measures directed against citizens. Lies and deceit will be stock and trade of media, politicians, and educational institutions. Such are the bellwethers of a multiculturalist advent.

No successful society shows a spontaneous tendency towards multiculturalism or multiracialism.

Just as every aspect of life had to be brought under political control in order for the commissars to impose their vision of society, the multiculturalists hope to control and dominate every aspect of our lives. Today’s “political correctness” is the direct descendent of Communist terror and brainwashing.

This technique was developed by Marxist ideologues who used multiculturalism in Russia to divide and conquer resistance to the institution of a communist state. The end result of their successful takeover was the murder of thirty million humans in the Soviet Union alone. Multiculturalism can further be used as “transitional tool” to take a targeted population from one form of government to another.

Multiculturalism is being used as a hammer to forge the compliant people who will compose the obedient states of the New World Order. As a weapon of post modern political warfare multiculturalism has few equals, which, thus explains its use currently against all of Western Europe, the United States, Canada, Australia, and New Zealand. Deliberate fragmentation of these nations and the resultant loss of national identity and purpose into politically disharmonious units, serves as a stepping stone to world government.

Social instability, caused by a steady erosion of standards and values, coupled with a scramble over dwindling economic opportunities by conflicting ethnic groups, produces precisely the alienation and conflict needed to implement a multicultural state. Further, the lack of common standards and values leads to personal disorganization, resulting in unsociable behavior. This is the life support system of a multicultural state. In a word: anomie.

What we call “political correctness” actually dates back to the Soviet Union of the 1920s (politicheskaya pravil’nost’ in Russian), and was the extension of political control to education, psychiatry, ethics, and behavior. It was an essential component of the attempt to make sure all aspects of life were consistent with ideological homogeneity which is the distinctive feature of all totalitarianisms. In the post-Stalin period, political correctness even meant that dissent was seen as a symptom of mental illness, for which the only treatment was incarceration.

China’s Brutal leader Mao Tse-Tung said,  “Not to have a correct political orientation is like not having a soul.”

Multiculturalism, like drugs, is an insidious weapon. Both destroy the heart and fabric of a people. All ties to family, community, and one’s people as a whole are destroyed by these two opiates of the human mind.

Totalitarianism was much more than state terror, censorship, and concentration camps; it was a state of mind in which the very idea of a private opinion or point of view had been destroyed. The totalitarian propagandist forces people to believe that slavery is freedom, squalor is bounty, ignorance is knowledge, and that a rigidly closed society is the most open in the world. And once enough people are made to think this way, it is functionally totalitarian even if a single dictator does not personally control everything.

A multicultural society is one that is inherently prone to conflict, not harmony. This is why we see a huge growth in government bureaucracies dedicated to resolving disputes along racial and cultural lines. These disputes can never be resolved permanently because the bureaucrats deny one of the major causes: race.

A necessary first step toward recovery is to look at politics, social policy, and government emanating from Washington D.C. with new eyes, unclouded by a lifetime of   false information and deception propagated by elitist sponsors. Pretending any longer that the bought and paid for political prostitutes in Washington D.C. represent you or anyone you know is tantamount to cutting your own wrist with a razor blade. Self-destructive behavior may qualify one for government “protected class status” under diversity laws–but it will not save you, your family, or your nation.

America, Canada, and most of Europe are ruled by politicians about whom the best that can be said is that they are men of ill repute, each out to loot the state. One thing is clear, the American ruling elite of today are far closer in ideological viewpoint to world government ruled by a privileged few than it is to the world of the American Revolution or the Constitutional Convention of 1789. Yet still, the spirit of 1776 lives on in this land. For once again rebellion to tyrants in obedience to God is afoot. Listen closely and in the distance you can hear the ring of  liberty’s bell calling gallant sons and noble daughters to her aid. They know no left, nor right, only treason. And they will not fear to answer. Let tyrants tremble. And though the heavens fall, let there be justice.

Multiculturalism is the road to a special kind of hell that we have already seen in this gruesome 20th century, a hell that man, having abandoned reason and in revolt against.

The news of Muslim sex attacks is being censored, whitewashed, and covered up. In Germany, the attacks were coordinated —...