Further proof that the laws of economics don’t give a flying leap about FEEEEELINGS, we have this news from Wal-Mart. 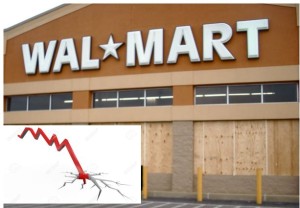 According to this, Wal-Mart has announced the closure of 269 stores and over 10,000 employees are going to lose their jobs. This comes nearly a year after Wal-Mart capitulated to the masses of liberal whiners demanding they increase wages for their workers. Last February, they raised the base hourly wage to $10/hour and made other changes meant to improve work conditions – which cost them over $1 billion.

But that doesn’t matter anymore to the workers at those 269 stores, ’cause now they’re going to be making precisely $0/hour.

And it’s not like this was an “all of a sudden” thing, either. Late last year, Wal-Mart had to cut back employees’ hours after raising wages because – SHOCKER – they couldn’t afford to keep hours at the rate they’d been.

I don’t expect advocates of the “living wage” (whatever that means) to understand why this happened. They’re probably just happy that the EEEEEEEEVIL Wal-Mart is having to shut down a bunch of its locations. It’s not like those employees had rent to pay or mouths to feed. Everything is Wal-Mart’s fault and all big corporations TOTALLY deserve this misfortune (not like corporations are run by actual people who are just trying to make a living or anything).

In Case You Missed It:  This Thanksgiving, Joy-Ann Reid Has Much To Be Thankful For
Posted in Financial and tagged Economy, Financial, Liberalism, Obamanomics, Unemployment.

What the Iranian Nuclear Implementation Day Means for US

Its been reported that “Implementation Day” is here and nuclear sanctions against Iran have now been lifted. But what exactly...