BDS supporters are Abbas partners in crime. They have blood in their hands for dictating the outcome of negotiations in advance and validating terror

The territories are not occupied, they are disputed. BDS supporters are acting as Abbas partners in crime. By imposing sanctions through BDS the EU is dictating the outcome of negotiations in advance and validating terror.

Although there never was a negotiated agreement on borders as demanded by the Oslo Accords, BDS supporters decided that all the land in dispute belongs to the Palestinians and that Israel should be punished for not complying to their dictate. Terrorists point to the moral support provided by the BDS to justify terror.

On December 24, 2015 Aish.com reported that “The Aish HaTorah family is overwhelmed with shock and grief over the horrific murder of Rabbi Reuven Biermacher, a beloved rabbi of the Aish HaTorah Spanish program. Rabbi Beirmacher spent the morning teaching Torah to his students and on his way out of the Old City was stabbed multiple times by two Arab terrorists just outside Jaffa Gate.

Rabbi Reuben Biermacher, a father of seven children ranging in ages 2 to 18 was a man full of joy and life. Born in Buenos Aires, Rabbi Biermacher, 45, moved to Israel five years ago.”

On December 29, 2015 Israel Hayom reported that “Dr. Ofer Merin, head of the Shaare Zedek Medical Center Trauma Unit, says wounds in recent stabbing attacks are not random  “It’s as if someone read the manual,” he tells Magen David Adom conference…

The terrorists who are committing the stabbing attacks that have become all-too-prevalent in recent months seem to be operating in a calculated manner and are aiming their weapons deliberately, intending to kill, says Dr. Ofer Merin, head of the Trauma Unit at Shaare Zedek Medical Center in Jerusalem.

“The attackers know where they need to hit; it’s not something random,” Merin, who has become a familiar media figure in the past few months given the number of wounded requiring treatment, told a Magen David Adom conference on updates in emergency medicine Monday.

“Three weeks ago, we received a wounded [man] who is still hospitalized with four [stab] wounds: one to the lungs, one to the right atrium, one to the right ventricle, and one to the neck,” Merin said. “It’s as if someone read the manual, and a wounded person comes in with two wounds to the heart. You learn that they [the attackers] know where to strike.” 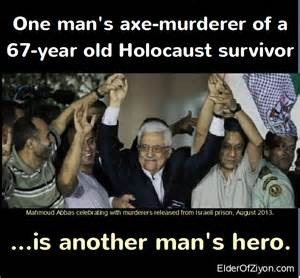 Abbas declares the terrorists “heroes” for randomly stabbing Jews. The stabbing attacks are a result of Abbas incitement. Fatah’s FB calls to “water the ground with blood”.  Israel can fight incitement by outlawing Abbas’ terror websites. On December 30, 2015 Arutz 7 reported that “Leading a new wave of incitement, Palestinian Authority (PA) Chairman Mahmoud Abbas’s Fatah faction has called on Palestinian children to “water (the ground) with blood” to destroy Israel.

“Teach your children to love the land; Teach them that we live a life of suffering; Teach them that there is a seed in the ground; If they water it with blood, a revolution will flower; Teach them that Fatah is the eternal revolution; That the ‘Storm’; Is the blade of the intifada; And that the Shabiba are the knights of the rocks,” reads the message.

The post, seen below, also celebrates the first Fatah terrorist attack against Israel in 1965 – two years before the 1967 Six Day War in which Israel liberated the territories that the PA claims in international forums that it is demanding…”

Fatah’s “Shabiba Youth Movement” Facebook Page addressed to Palestinian Children incites Palestinian children to water the ground with blood. Abbas was revealed to have made shocking statements, when he said that the murder of dozens of Israelis and the wounding of hundreds others is part of a “peaceful uprising.”

The call for a “peaceful” terror wave included statements by Abbas in early September, in which he blessed every drop of blood shed in Jerusalem “for Allah” and called to stop “filthy” Jews from visiting the Temple Mount. 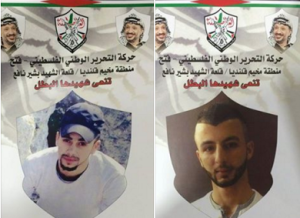 On December 2015 The Algemeiner reported that “From the official Fatah Facebook page comes the message that two people who murdered Ofer Ben Ari and Rabbi Reuven Biermacher in Jerusalem on Wednesday are “heroes” and “martyrs” who engaged in a “heroic operation” and are now immortalized and filled with glory.

The party led by Mahmoud Abbas is very excited that they managed to kill a couple of Jews.

I want to stress that yet again, I cannot find a single Arabic-language voice under PA rule — not one op-ed, not one article — that finds murdering Jews to be anything less than heroic.”

Abbas rejects the two state solution. Lt. Col. (ret) Jonathan Halevi explained in the Jerusalem Center for Public Affairs that Abbas supports a phased plan for Israel’s destruction “…Beneath the moderate guise that Abbas tries to project is a Palestinian leader who unreservedly supports terror and demands to implement what the Palestinians call the “right of return.”

…What the Palestinians mean by “right of return” according to Resolution 194 and the Arab Peace Initiative is simple enough and was ratified as an official law by the Palestinian parliament with Abbas’s approval.

According to the 2008 Law of the Right of Return of the Palestinian Refugees:

“The right of return of the Palestinian refugees to their homes and property, while receiving compensation for their suffering, is an inalienable and enshrined right that cannot be compromised, replaced, reconsidered, interpreted otherwise, or subjected to a referendum.

The right of return is natural, personal, collective, civil, political, passed on from father to son; it is not nullified by the passage of time or by the signing of any agreement and it cannot be abolished or waived in any way.

The Palestinian refugees shall not be resettled or displaced as an alternative to the right of return.

Anyone who violates the provisions of this Act shall be guilty of the crime of treason and will be subject to all criminal and civil penalties prescribed for this crime.

Anything that contradicts this law is considered null and void, and any legislation or agreement that will derogate from the right of return or contradict the provisions of this Act shall be deemed null and void.”

In other words, even after an Israeli withdrawal to 1967 borders and the establishment of a fully sovereign Palestinian state, the conflict will remain unchanged and Palestine will demand the “return” to Israel of the millions of refugees and their descendants. The Palestinian demand for “return” entails the transfer of millions of Jews from their homes and the end of the state of Israel…”

Despite Abbas rejection of the two state solution and his commitment to the destruction of Israel, Obama blames Israel for the failure of negotiations and threatened to abandon Israel in the UNSC. On March 2015 Newsmax reported that “The White House on Wednesday suggested it could reverse its decades-old policy of using its veto in the United Nations Security Council to protect Israel. It could refuse to veto resolutions related to the Palestinians or introduce a measure of its own, The Wall Street Journal reported. The U.S. could also lend its support to a two-state solution based on Israel’s 1967 borders, a senior White House official told The New York Times.”
http://www.newsmax.com/Newsfront/israel-un-security-council-veto/2015/03/19/id/631103/

Obama is in a rush to pass a UNSC resolution imposing a timetable for an Israeli withdrawal from the West Bank before his time in office ends. He knows that the next administration will not be willing to concede this to the Palestinians without taking into consideration Israel’s security needs.

The IDF must do everything possible NOT to kill the terrorists after a stabbing attack, arrest them, let them live. That is the only way of frustrating Abbas’ strategy. Don’t give him the high body count that Obama needs to justify a UNSC resolution.

The Palestinian Media Watch translated an interview by one of Hamas founders Mahmoud al-Zahar to the Palestinian newspaper Al-Ayyam in which he said “transfer what it has [in Gaza] or just a small part of it to the West Bank, we would be able to settle the battle of the final promise [to destroy Israel] with a speed that no one can imagine…[Some] have said Hamas wants to create an Islamic emirate in Gaza. We won’t do that, but we will build an Islamic state in Palestine, all of Palestine…”

Those who advocate for a solution in the UNSC cannot ignore that what happened in Gaza can also happen in the West Bank. After Israel withdrew from Gaza, Hamas took power and started missile attack against Israel.

If a Palestinian State is created in the West Bank Hamas will attack Israel with missiles from the West Bank as it does from Gaza. Imposing a solution in the UNSC will make the situation much worse, it will make life in Israel impossible and lead to war. Only those that do not care for the safety of Israel’s citizens would advocate for this.

Jews have been persecuted and expelled from most Middle East Countries and they managed to find refuge in Israel, a country smaller than New Jersey. Jimena.org reported that since 1948, 850,000 Jews have been expelled from Algeria, Egypt, Iran, Iraq, Lybia, Lebanon, Morocco, Syria, Tunisia,Yemen and other Middle East Countries. Obama’s threat to impose a Palestinian State through the UNSC endangers the existence of Israel, the only safe heaven for Jewish refugees in the Middle-East.

The Palestinians already have a State in Jordan. Since the US/EU claim that the conflict can be solved with a UNSC resolution why not submit one declaring that the Palestinians already have a State in Jordan? If Jordan is declared the Palestinian State the Arabs currently living in Israel can continue but they will be Jordanian Citizens. Most of the Jordanian population is Palestinian, the previous King said “Jordan is Palestine, Palestine is Jordan”. The Queen of Jordan Rania Al-Yassin was born in Kuwait to Palestinian parents Faisal Sedki Al Yassin and Ilham Yassin from Tulkarm, Jordan has a Palestinian Queen, the next King of Jordan will be the son of a Palestinian. Jordan was also part of British Mandate Palestine, it must also be part of the solution.

In Case You Missed It:  UK hospital doctors are quitting in shocking numbers, leaving industry prone to “complete collapse” in less than a year
Posted in Freedoms.

Clinton should go to jail for not preventing a N.Korean nuclear bomb

"140,000 expected victims in a Nuclear war, Obama could have prevented this . The quantity of casualties killed in a limited...