Trump was shocked that Cruz came out against ethanol subsidies because that’s the only way you can win Iowa:

Trump again hits Cruz on ethanol, then says that he, like other pols, are controlled by special interests and donors. 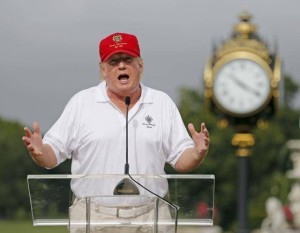 But he’s very happy to announce an endorsement from Sarah Palin, who called to end ALL energy subsidies in 2011:

Asked Tuesday whether she supports the federal subsidy of ethanol, an always critical issue in the presidential nominating cycle, former Alaska Gov. Sarah Palin went one step further and called for the elimination of all energy subsidies.

“I think that all of our energy subsidies need to be relooked at today and eliminated,” Palin told RCP during a quick stop at a coffee shop in this picturesque town tucked into the south-central Pennsylvania countryside. “And we need to make sure that we’re investing and allowing our businesses to invest in reliable energy products right now that aren’t going to necessitate subsidies because, bottom line, we can’t afford it.”

If she runs for president, Palin plans to make energy issues a centerpiece of her campaign and will tout her record as governor on restructuring the oil tax regime in Alaska and initiating a massive natural gas pipeline project, which currently remains in limbo.

Her emphatic stance against ethanol subsidies may ruffle some feathers in the nation’s first voting state of Iowa, but it will also win her kudos from fiscal conservatives who praised former Minnesota Gov. Tim Pawlenty when, in a speech announcing his candidacy in Des Moines, he called for the phasing out of the federal subsidies that cost taxpayers about $5 billion last year.

Trump is basically saying here that he’ll do whatever it takes to get votes, even if it means supporting enormous government subsidies to buy them – not a terribly conservative value.

He also criticized Cruz today for calling McConnell a liar in the Senate. So he’s against calling out lies from politicians. Another conservative value?

Attacks on Women in Europe Highlight Double Standard of Multiculturalism

The horrendous attacks on women in Cologne, Germany, on New Year’s Eve have exposed a deep crack in the façade...