In a shocking poll released by Die Welt, 90% of Chancellor Merkel’s voters reject her asylum policy, and 79% of the entire German population is in favor of tightening immigration policy. From Die Welt (translation thanks to Google Translate): 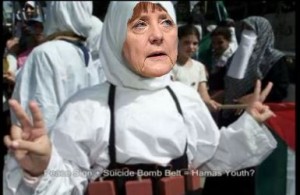 Coping with the asylum crisis is the crucial test for the federal government. And not only at the political level is increasing the pressure on Chancellor Angela Merkel (CDU). Increasingly, in the population are growing doubts whether the country can cope with the wave of refugees.

In a recent N24-Emnid survey showing that an overwhelming majority of 79 percent of the population is in favor to tighten the conditions for reception of incoming refugees.

Taking only the voters of the CDU / CSU into consideration, even 90 percent of respondents to change course. 15 percent think the course we see fit, under the Union voters there is less than one in ten (eight percent).

When asked whether Merkel is still the correct Chancellor of Germany, are 67 percent of CDU voters behind her. In the total population, the 53 per cent see that. 42 percent of the population believe after all that Merkel is no longer the right Chancellor.

by Andrew Bieszad In an elegant and passionate letter, British television personality and former CNN correspondent Piers Morgan, who is know...