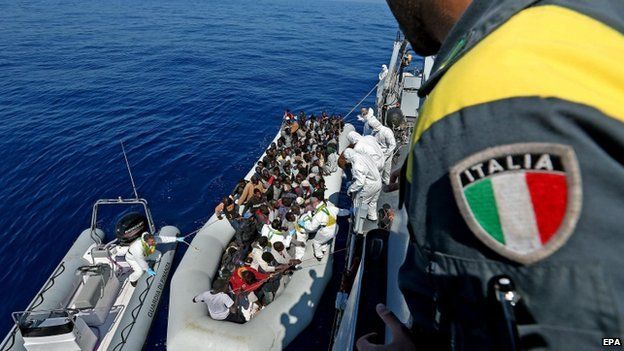 As the Schengen treaty guaranteeing open internal European borders continues to crumble, Italy is gearing up for a tidal wave of as many as 400,000 immigrants “in the coming weeks,” according to Italian sources, and worse still, they will be coming to stay.

Italian authorities fear that their worst nightmare is materializing before their eyes: as droves of immigrants arrive on Italy’s shores, they have no choice but to remain in Italy.

According to analysts, the worst is yet to come. Until a few days ago the Italian peninsula was a transit channel for tens of thousands of desperate migrants en route to the countries of Northern Europe, yet now these same migrants are finding themselves stranded in Italy because of closed borders to the north. Overnight, Italy has moved from being a passageway to a dead end.

Six countries— Germany, Austria, Sweden, Norway, Denmark and Slovenia—have suspended the treaty for two years, and others appear ready to follow them. In many respects, Schengen no longer exists.

With the recent closure of the Austrian border, the border points have already begun to be besieged, and authorities are expecting a migrant tent city to form there. Moreover, when good weather returns, they warn, arrivals could increase tenfold.

The Italian Minister of the Interior, Angelino Alfano, lashed out at those proposing that Italy follow suit and shut down Schengen, warning them that the economic damage to Italy would be enormous and that “we cannot put barbed wire in the Mediterranean Sea,” suggesting there would be no way to stem the tide of immigrants.

As a country of first arrival, Italy has more to lose from the breakdown of Schengen than any other European nation, perhaps with the exception of Greece. In 2015 alone more than 150,000 migrants reached Italian shores, but the vast majority continued north, with many heading to France, Germany or the countries of Scandinavia. Now that the Schengen Treaty is all but a dead letter, the Alps have once again become an insurmountable barrier.

In this dramatic panorama the bulk of the migrants are expected to come through the “Balkan route,” and according to experts, some 400 thousand immigrants will be arriving in the coming weeks. Sources at the Interior Ministry have also expressed fears that many migrants will begin to circumvent Greece and Croatia and come directly to the ports of Ancona and Bari in southern Italy.

Meanwhile, Prime Minister Matteo Renzi is wringing his hands in public, insisting that the end of Schengen is the end of Europe.

“Questioning the idea of ??Schengen,” Renzi wrote yesterday, “means killing the idea of ??Europe. We fought for decades to break down walls: to think of rebuilding them today is to betray ourselves.” He also rejected the very idea of “closing ourselves in behind walls,” saying that to do so would be to live in fear.

The Interior Ministry, however, is reportedly preparing for the worst. “We need to strengthen the Frontex defense of the external borders and the establishment of a European border police force,” said deputy minister of the Interior, Philip Bubbico.

Bubbico knows that it is one thing to threaten mass expulsions for those not entitled to political asylum, and another thing to carry it out. “What else can we do?” he said. “Throw them into the sea?”

In Case You Missed It:  Get Ready for the Economic Collapse
Posted in Terrorism and tagged Europe, Illegal Immigration, Italy, Jihadists, Mediterranean, Migrants.

SAN DIEGO (Reuters) - An active shooter was reported at the Naval Medical Center San Diego on Tuesday, according to...