Most Americans do not believe Donald Trump, the Republican presidential frontrunner, is very religious or even religious at all, says a poll released Wednesday. 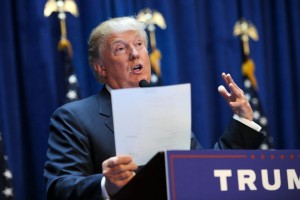 That could be an obstacle for the billionaire turned politician in a country where most Americans say they would be less likely to vote for someone as president who does not believe in God.

The poll by the Pew Research Center found that nearly 60 percent of Americans believe Trump is either not religious enough (22 percent) or not religious at all (37 percent).

Only 30 percent said Trump, who identifies as a Presbyterian, is religious enough (25 percent) or “very” religious (five percent).

Among Republicans, 47 percent don’t regard Trump as religious.

“The conventional wisdom in American politics has long been that someone who is not religious cannot be elected president of the United States,” Pew said.

And yet, the poll also found that 56 percent of Republicans consider Trump to be a “good” or “great” candidate.

By far, more Americans see all three Trump rivals for the Republican nomination as religious — 65 percent, 68 percent and 61 percent respectively.

Her main Democratic rival, Bernie Sanders, who is Jewish, is viewed as “not particularly religious” by about 40 percent of Americans, but only 35 percent say he falls short on religion, compared to Clinton’s higher numbers on that question.

“Being an atheist remains one of the biggest liabilities that a presidential candidate can have,” Pew said.

The poll found some signs of changing attitudes, however. The percentage of Americans who say they would be less likely to vote for an atheist is down 12 points from 2007 in the Pew poll.

The poll was conducted by telephone among 2,009 adult Americans from January 7 to 14.

AFP contributed to this report

In Case You Missed It:  More Pictures and Videos from ‘End the FBI’ Rallies Across the Country – This Time in Virginia
Posted in Freedoms and tagged Election, Freedom, United Socialist States of America, White House.

How the Washington Post Got Virginia’s Voter ID Law Wrong

Virginia provides an excellent example of how the photo ID debate has been waged in state legislatures and reported (poorly)...