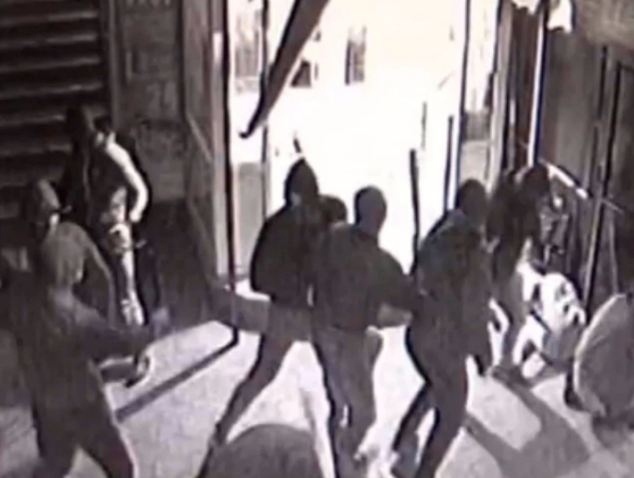 400 angry locals, who happen to be Russian immigrants living in Germany, took the law into their own hands recently after a 13-year-old Russian schoolgirl was gang-raped by Muslim refugees in a vicious 30-hour ordeal. Knowing the German police would do absolutely nothing to bring the Muslim rapists to justice, the angry locals apparently put the rapists to death. (LD)

Abuses by migrants in Germany has forced local men to take up arms and teach the Muslim migrants a lesson. The editorial office of Sovsekretno (meaning “Top Secret”) received a message about a massacre that was conducted on the town of Bruchsal by Russian immigrants to Germany — about 400 “Russian Germans”.

“According to police, the scene (a migrant Hostel) was attended by around 120 cars with 3-4 Russian Germans in each. The “Southerners”, the Arabs and the Moroccans, tried to resist and fired guns. But they were beaten with baseball bats and bar stools. The “Rusaki”, as the Russian living in Germany call themselves, strolled across all floors, said the source to Sovsekretno about the number of Russian  residing in Germany.

According to the source, the cause of the massacre was probably the rape of the displaced 13-year-old Russian girl Lisa.

As was previously reported by the media, in Berlin a group of refugees for over 30 hours raped a 13-year-old schoolgirl. The child was kidnapped on January 11 near the railway station when she was returning home from school.

A conflict of this scale has never happened before in Germany since the beginning of the mass migration of refugees into the country. The abuse of women by migrants in Cologne and multiple cases of rape have angered the local population. The policy of non-intervention by the police and attempts to gloss over the crimes committed by refugees has forced people to protect their families.

A Russian immigrant from the commune of Lichtenfels in Bavaria said: “The city has become dangerous to walk in and even to drive a car. When I stop at traffic lights, I lock the inside doors of the car, so that no one can climb into the cabin. The same is done after my trip to the supermarket. I get into the car quickly and close the doors. Only then do I start the engine.”

According to the Russian immigrant, a woman who moved to Germany 10 years ago, the Muslim migrants do not respect the rules of the road. They walk on foot on the sides of highways and this can cause an accident. Refugee women are seen begging. And the refugee men rob and raid supermarkets. The authorities and the police of Germany are silent about the incidents and just condemn the actions of migrants… [Defective translation].

“In Frankenberg, the supermarket “Hermes” was transformed into a refugee shelter. It houses a thousand people. As a result, the city became restless, and I’m going to get a permit for my wife to bear arms,” said the source to Sovsekretno.

“Local residents are outraged by the impudent behaviour of these migrants. They take masses of products in the local shops without paying for them. When cashiers call the guards, the migrants pretend they don’t understand the language. The mayor of Frankenberg arrived at one of these incidents and tried to speak to them in several languages. To no avail. In the end, he paid for the migrants. This caused observers of the incident to ask: “Why do the native Germans spend their lives working so hard when the migrants get everything for free?”

According to the source, the authorities tried to appeal to the local population to help the migrants and get them to settle down in vacant residential premises. After this, however, there were a series of arson attacks on the private property of those Germans who had helped the refugees.

Currently, men from the Netherlands are protesting against the excesses of these foreign migrants by walking  round the streets in miniskirts. Russian immigrants to Germany have been among the first to defend their families with the use of arms.

Russian migrants who we talked to did not hide their radical views. “If my wife or daughter were harassed by any of these migrants,” one of them said, “I would take a bat and smash them up!”

UPDATE: The events related above appear to have a sound basis in reality. Yahoo News has just confirmed that there is considerable tension between Russia and Germany over what happened to the 13-year-old Russian schoolgirl Lisa in Germany where she is reported to have been raped by Muslim migrants over a 30-hour period. See Germany warns Russia over ‘exploiting’ teen ‘rape’ case.

In another explosive story proving the German government’s war against her own people, 17-year veteran officer Sven Kleuckling has been...