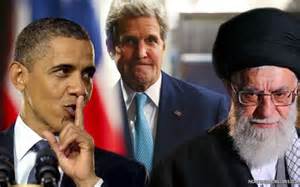 Khamenei awarded the Fath (“Victory” or “Conquest”) medals to IRGC Navy commander Sardar Fadavi and four others “for their courageous act of seizing the American watercraft and arresting the transgressing American forces near Farsi Island,” according to a brief report on his website, accompanied by photos.

He also approved promotions for commanders and personnel who were “involved in the operation,” it added. State media reported on the ceremony.

Earlier the Obama administration portrayed the Iranian government’s response to the January 12-13 incident – which occurred three days before the Iran nuclear deal’s “implementation day” and the easing of sanctions – as helpful and professional.

Secretary of State John Kerry expressed his “gratitude to the Iranian authorities for their cooperation in swiftly resolving the matter” while Vice-President Joe Biden suggested that the IRGC had come to the aid of U.S. sailors who were “in distress,” after one of the two patrol vessels had mechanical difficulties.

Republican critics slammed the administration and called the incident “humiliating.”

Later, both Kerry and Defense Secretary Ashton Carter voiced their anger at the widely distributed images of the kneeling U.S. sailors. Broadcast footage also showed the sailors relaxing and eating, and one apologized on camera for inadvertently entering Iranian territorial waters.

“I was very, very angry at it,” Carter said during a press briefing at the Pentagon on Thursday. “To see our guys in that situation on Iranian TV, that’s really not okay.”

“This is not the way they should have been treated, and it’s very – for certain not the way Americans would have treated foreign sailors in a comparable circumstance.”

Iran’s use of the incident for propaganda did not end with the release of the sailors and their boats. Senior military officers were quoted afterwards boasting about the episode, with one claiming Iran had scared off U.S. military aircraft which overflew the area, by threatening “hellfire.”

Khamenei attributed the sailors having entered Iranian waters, thus allowing their capture at gunpoint, to “an act of God” – a quote that was aired repeatedly, along with photos of the kneeling sailors, on official social media accounts.

US Military Leaders Agree: Women Should Register for the Draft