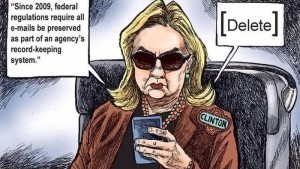 Unable to translate her “female privilege” into sufficient votes from daft women, Hillary Rodham Clinton is now employing a “barking dog” ploy in a last-gasp desperate attempt to derail Bernie Sanders and his socialist malarkey which has enraptured millions of millennials and other Democrat-inclined malcontents.

As shown in online videos, Hillary’s barking dog strategy has the former “inevitability queen” barking and yelping into a campaign microphone like a BITC* in heat!

No doubt many Clinton supporters, also known as culturally-deprived dim wits, would be convinced by Clinton’s barking dog stunt.

However, remember this, Hillary: FBI investigators and Grand Jury participants are NOT likely to be so easily swayed. In simple terms, that dog will NOT hunt before educated and intelligent voters!

In Case You Missed It:  Giuliani Calls on President Trump to “Declassify Everything!"
Posted in Freedoms.

Next President, Not Obama, Should Pick Scalia’s Successor

The unfortunate passing of Supreme Court Justice Antonin Scalia has opened a vacancy on our nation’s highest court. Whoever fills...