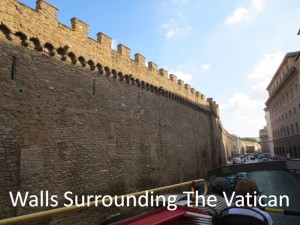 On Wednesday, Pope Francis traveled to Ciudad Juarez in Mexico, where he stood across the border from the United States and paid homage to “migrants who have perished trying to reach the United States just a stone’s throw away,” according to Reuters. He then blessed crosses next to which “shoes of migrants who died” were laid, and added, “No more death! No more exploitation!”

Not content to rabblerouse on behalf of an inundation of the world’s great economic superpower – a free and open superpower with an extraordinarily beneficent immigration policy – Pope Francis then attempted to shame Donald Trump and other Republicans who favor a border wall. He told reporters, “a person who thinks only about building walls, wherever they may be, and not building bridges, is not Christian. This is not in the Gospel. As far as what you said about whether I would advise to vote or not to vote, I am not going to get involved in that. I say only that this man is not Christian if he has said things like that. We must see if he said things in that way and in this I give the benefit of the doubt.”

To which Trump responded, “If and when the Vatican is attacked by ISIS, which as everyone knows is ISIS’s ultimate trophy, I can promise you that the Pope would have only wished and prayed that Donald Trump would have been President because this would not have happened.”

The Pope obviously has his priorities well in order: he says he can’t judge homosexuals who consider themselves Catholic, but he’s happy to judge anyone in favor of border control. He’ll rip capitalism – the very economic system acting as a magnet from the Marxist countries of Latin America – and jabber about global warming, but say little to nothing about the Christians and Jews being slaughtered in the Middle East by Muslims. That’s because the Pope is a devotee of a less radical version of liberation theology, a philosophy that mashes up Marxism with Catholicism and was ripped by Pope John Paul II (“does not tally with the church’s catechism”) and Pope Benedict XVI (“singular heresy”). Pope Francis has introduced liberation theologists back into the Vatican. As The Guardian (UK) reported last year:

J Matthew Ashley, chair of the theology department at the University of Notre Dame, where Gutiérrez is also professor, says the pope has been greatly influenced by the Argentinian variety of liberation theology, which is called the theology of the people… “There are many points of similarity between Gutiérrez’s theology and Pope Francis’s thought, addresses and actions. Both have emphasised that opting for the poor requires getting to know the poor, becoming friends with the poor… both have a great respect for the spirituality of the poor, particularly in everyday life,” Ashley says.

But it seems that the Pope’s distaste for borders runs only one way: away from the Vatican. The Vatican, like many ancient cities, is surrounded by massive walls. Those walls were built over a thousand years ago. Its immigration policy is incredibly strict: while 800 people live within Vatican City, just 450 or so are citizens. The security at Vatican City is second-to-none: the Gendarmerie Corps of Vatican City State has 130 members, armed with guns. Virtually the only crime in Vatican City is pickpocketing in St. Peter’s Square. St. Peter’s Square is typically policed not by the Swiss Guard but by Italian police.

Meanwhile, according to CNN, the Vatican Bank holds $8 billion in assets; the Vatican has over $1.2 billion in assets off the books; it holds countless priceless assets, of course. How about spreading the wealth around? Why not build bridges? Why not welcome thousands of Syrian Muslim refugees or Latin Americans seeking to enter the United States illegally into Vatican City? Thus far, the Pope’s big move in favor of open immigration has been to accept two families into Vatican parishes.

That, by the Pope’s own lights, is insufficient.

It’s time for the wall to come down, Pope Francis. Gorbachev didn’t build the Berlin Wall, but he tore it down when the time came. Pope Francis can be just as historic. He can offer free, unchecked and permanent entrance not merely into St. Peter’s Square but into the Vatican itself; he can redistribute the wealth of Vatican City to help migrant families. After all, a person who thinks only about building walls, wherever they may be – even the Vatican — is not Christian, we’ve recently heard. Such exclusivity isn’t in the Gospel.

How about it, Pope Francis? Why not open this gate? Why not tear down this wall?

Unless, perhaps, there’s often an excellent reason for gates and walls.

Ben Shapiro is Senior Editor-At-Large of Breitbart News, Editor-in-Chief of DailyWire.com, and The New York Times bestselling author, most recently, of the book,The People vs. Barack Obama: The Criminal Case Against The Obama Administration (Threshold Editions, June 10, 2014). Follow Ben Shapiro on Twitter @benshapiro.

Dennis Prager destroys ‘white privilege’ myth with one simple statistic.. Here’s the stat, then let’s talk: Whatever reason one gives...