It’s about time for Trump supporters to stop being in denial and to start realizing that their candidate is a leftist and not a conservative that will expand socialized health care, will fund Planned Parenthood, will appoint liberal judges to the Supreme Court, and will make deals in Washington that will keep pushing our country in the wrong direction and benefit his interests. This is all very bad, but what might be the worst part are the many lies and attacks by Donald Trump. Here is Trump caught again in another lie.

Trump supported invading Iraq as early as 2002, if not earlier.

Here is the audio that was recently uncovered by Buzzfeed: 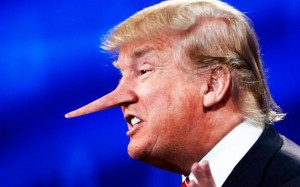 For months, Donald Trump has claimed that he opposed the Iraq War before the invasion began — as an example of his great judgment on foreign policy issues.

But in a 2002 interview with Howard Stern, Donald Trump said he supported an Iraq invasion.

In the interview, which took place on Sept. 11, 2002, Stern asked Trump directly if he was for invading Iraq.

“Yeah, I guess so,” Trump responded. “I wish the first time it was done correctly.”

Trump has repeatedly claimed that he was against the Iraq War before it began, despite no evidence of him publicly stating this position. On Meet the Press, Trump said there weren’t many articles about his opposition because he wasn’t a politician at the time.

“Well, I did it in 2003, I said it before that,” Trump said of his opposition to invading Iraq. “Don’t forget, I wasn’t a politician. So people didn’t write everything I said. I was a businessperson. I was, as they say, a world-class businessperson. I built a great company, I employed thousands of people. So I’m not a politician. But if you look at 2003, there are articles. If you look in 2004, there are articles.”

Trump’s comments on Stern are more in line with what he wrote in his 2000 book,The America We Deserve, where he advocated for a “principled and tough” policy toward “outlaw” states like Iraq.

“We still don’t know what Iraq is up to or whether it has the material to build nuclear weapons. I’m no warmonger,” Trump wrote. “But the fact is, if we decide a strike against Iraq is necessary, it is madness not to carry the mission to its conclusion. When we don’t, we have the worst of all worlds: Iraq remains a threat, and now has more incentive than ever to attack us.”

Trump, asked by CNN’s Anderson Cooper at a town hall on Thursday about the Stern interview, said, “I could have said that.”

“I could have said that,” Trump said. “Nobody asked me that. I wasn’t a politician. It was probably the first time anyone has asked me that question.”

Trump added, “When you’re in the private sector, you get asked things, and you’re not a politician, and probably the first time I was asked. By the time the war started, I was against it, and shortly thereafter, I was really against.”

Here is what Trump has said in the past about his opposition to the Iraq invasion:

At the Feb. 6 debate in New Hampshire, Trump said, “I’m the only one up here, when the war of Iraq — in Iraq, I was the one that said, ‘Don’t go, don’t do it, you’re going to destabilize the Middle East.’”

At a Republican debate in September of last year, Trump said he could provide 25 stories showing his early opposition to the Iraq War.

“You can check it out, check out — I’ll give you 25 different stories,” Trump said.

In another interview with Neil Cavuto in January of 2003, a transcript of which was obtained by BuzzFeed News, Trump given the opportunity to comment on the war did not say he opposed it but stated “it`s sort like either do it or don`t do it.”

TRUMP: Well, I`m starting to think that people are much more focused now on the economy. They are getting a little bit tired of hearing,? we`re going in, we`re not going in, the – you know, whatever happened to the days of the Douglas MacArthur. He would go and attack. He wouldn’t talk. We have to – you know, it`s sort like either do it or don`t do it.? When I watch Dan Rather explaining how we are going to be attacking, where we`re going to attack, what routes we`re taking, what kind of planes we`re using, how to stop them, how to stop us, it is a little bit disconcerting. I`ve never seen this, where newscasters are telling you how – telling the enemy how we`re going about it, we have just found out this and that. It is ridiculous.

CAVUTO: Well, the problem right there.

TRUMP: Either you attack or you don`t attack.

CAVUTO: The problem there, Donald, is you`re watching Dan Rather. Maybe you should just be watching Fox.

TRUMP: Well, no, I watch Dan Rather, but not necessarily fondly. But I happened to see it the other night. And I must tell you it was rather amazing as they were explaining the different – I don`t know if it is fact or if it is fiction, but the concept of a newscaster talking about ­the routes is – just seems ridiculous. So the point is either you do it or you don`t do it, or you – but I just – or if you don`t do it, just? don`t talk about it. When you do it, you start talking about it.

CAVUTO: So you`re saying the leash on this is getting kind of short here, that the president has got to do something presumably sooner rather than later and stringing this along could ultimately hurt us.

TRUMP: Well, he has either got to do something or not do something, perhaps, because perhaps shouldn’t be doing it yet and perhaps we should be waiting for the United Nations, you know. He`s under a lot of ?pressure. He`s – I think he`s doing a very good job. But, of course, if you look at the polls, a lot of people are getting a little tired. I think?the Iraqi situation is a problem. And I think the economy is a much bigger problem as far as the president is concerned.

CAVUTO: Are you still bullish on the markets or you have your doubts now?

BY MICHAEL Throughout history, governments have staged attacks on their own people in order to place the blame on their...