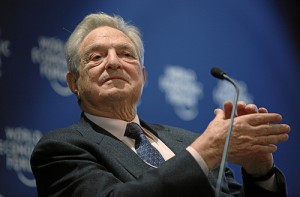 According to Western media, he has killed far lesser people for far lesser offenses.

Let me be perfectly clear: I am not advocating for Mr. Putin to kill or in any way harm Mr. Soros, disgusting and treacherous as the latter man may be. That is not the point of this exercise. The point is to ask, why hasn’t he? Why doesn’t he?

It’s a fair question. After all, how many people has evil Putin ‘killed’ for far less offenses over the years? If we are to believe the Western media portrayal of Putin as a murderer – either openly stated or subtly implied (…killed ‘under Putin’s leadership’ and ‘under mysterious circumstances’) – then Soros should have been put on ice by the Kremlin boss long ago.

If, like the West at minimum implies, Putin killed hundreds of people in a series of apartment bombings in order to drum up support to kill untold thousands more in Chechnya; if he killed a journalist for writing some articles he didn’t like; if he killed a political opponent because he was no threat to him; if he killed a former KGB agent for ‘antagonizing’ him; if he killed a gentle accountant for ‘standing up to him’; then why in the world would he let a man live who has caused more problems for him – both internationally and domestically – than any one of the aforementioned, or any combination thereof?

After all, Soros was one of the puppet masters behind the Georgian attack on South Ossetia which killed Russian peacekeepers (along with many innocent civilians). He was one of the puppet masters behind the Maidan coup in Ukraine, which sparked a civil war, caused the deaths of thousands of Russians, and continues to rage to this day. He openly supported sanctions against Russia and called for a 50$ billion dollar fund to, among other things, help wrest Crimea back into the Ukrainian fold against the wishes of its Russian population. He fomented social unrest by trying to tarnish the legitimacy of Putin’s 2012 election through his Open Society Foundations and the Open Society Institute Assistance Foundation (both of which have since been shut down and thrown out of the country). He supported Al-Qaeda terrorists through the ‘White Helmets’ group, which mendaciously claimed that Russia was responsible for civilian casualties in Syria.

We could go on and on; but there is really no need. For if Putin truly is the eternally–crazed creature of the KGB who murders people for the most trivial offenses – which is precisely how West continuously presents him – then surely the abovementioned offenses are more than enough to warrant Soros’ immediate removal from this world.

So, again, it begs the question: If Vladimir Putin is what the West says or implies he is, then why doesn’t he kill George Soros?

In Case You Missed It:  OPERATION SANDMAN now activated – Saudi Arabia announces END of dollar dominance in global oil trade … the dominoes begin to fall on the US empire
Posted in Freedoms and tagged Assassination, Vladimir Putin.

Bernie Sanders was a huge loser who didn’t earn a steady paycheck until he was 40 years old. He was a...