Values are relative. So it’s wrong to criticise other cultures. All cultures are equal. 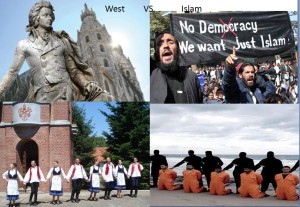 How often do you hear that? Cultural relativism as it’s interpreted, is to imply that ‘all cultures are equal’, and is behind a current pervasive, creeping paralysis in thought. A paralysis which makes people check themselves in uttering any critical comment about other cultures or religions, and in particular, Islam. It’s behind notions such as ‘Islamophobia’ that would have you believe that any criticism of Islam or of Muslim culture – or any culture – is off limits. It’s behind claims that all religions have ‘equal merit’, and stultifying attempts at interfaith harmony that are anaesthetising critical minds into attitudes of brute stupidity. (Ironic that the notion that ‘all religions are equal’ ends up tip toeing around one religion in particular.) (Shh, don’t mention which one.)

But fear not. It’s child’s play to demonstrate that these views are incoherent. And we must, for this misguided attempt to value all cultures to the same degree, ironically threatens to undermine and therefore disvalue the culture in the West.

For our long fought-for and many-faceted Western culture includes such core and precious ideas as freedom of thought, freedom of expression, and admiration for reason, science, imagination, and the arts. And included within this long list of values and aspirations is the idea that we can learn from each other, from examining ourselves, from examining the past, from imagining the future, that we can engage in argument and investigation, and that we can therefore make progress.

So, for example, we now agree that a society where, as happened at times in our past, people may be imprisoned for their sexuality, or burned at the stake for their beliefs, or forbidden an education because of their gender, is worse than a culture which respects human rights and leaves individuals an arena of private space within which peacefully to live their lives. We firmly reject those aspects of our own past. And we are able to reject them because of key elements in our culture which has enabled it to advance such self-criticism.

So, here is MOVE ONE against ‘all cultures are equal’: It is inconsistent to criticise a culture at a former time – our culture’s own past – and yet claim that cultures which exist in the present, but in different geographical regions, are beyond criticism, and that they are equal to ours.

To explain let’s put this, somewhat artificially, in mathematical terms. Suppose we rate the culture of medieval Western Europe as a 5. This is equal to all other cultures, according to this version of cultural relativism, since if we believe that ‘all cultures are equal’, then they must therefore all be rated 5 too.

But, we consider our own culture in modern times as an improvement on medieval Western Europe. So, say we rate our culture now a 7, in comparison to our past score of 5. But that would mean that we rate it better than other cultures now, since we just gave all cultures a 5 when we first started this game. So, perhaps all cultures should now be rated a 7. But that would make them better than medieval Western Europe. And then suppose some of these have themselves scarcely changed since medieval times? So they should be still 5 then? Oh oh … You can see what ridiculous tangles this produces.

And because our culture in the West has as key values the idea of such self-scrutiny, the search for reason, evidence and consistency, and the striving for social progress, this means we in particular should worry that this theory about cultural relativism leads to such irrational nonsense. But then, perhaps we should simply stop using reason and hoping for consistency … since these are simply artefacts of our culture, according to relativism. But would that make our culture ‘better’?

No, of course not, according to cultural relativism. Because all cultures are equal. So how could we possibly make ours better? So, actually, we may as well stick with the one we’ve got, including its ideals of reason, argument and evidence.

Confused? Of course you are.

Because in examining ‘all cultures are equal’, we have reached what logicians call a ‘reductio ad absurdum’. We can deduce conclusions from the premise of cultural relativism which are inconsistent with each other. So the premise must be false.

Note, too, this important lesson – the notion that ‘all cultures are equal’ is hostile to the idea of social progress. Sound familiar?

And there’s more to come! Suppose someone replied to the first move by saying, ‘well, we are entitled to criticise our own past cultures, but not other people’s cultures, past or present’. What then?

Time for MOVE TWO. A common argument from cultural relativists to the conclusion that we must not criticise other cultures goes like this: values do not have any ‘objective’ basis but can only be justified from within that particular culture. So, we must not criticise other cultures- we have no basis to do so. Only those inside a culture can have anything to say about it. Nobody else can possibly understand and appreciate the nuances of that culture.

For to say ‘all cultures are equal’ is to judge all cultures from … where? From some kind of ghostly mysterious place outside of all societies. But … cultural relativism asserts that there is no such objective ground of judgement. Again, we are reduced to nonsense.

Note too that the idea that all cultures are equal is just wacky, man – by what possible means could this come about? Some cosmic Invisible Hand doling out equal servings of good and bad to every human culture and to every religion that anyone ever dreamt up?

Wow. That takes some faith to believe the world is designed so fairly. And there’s silly old me, thinking that cultural relativists didn’t believe in absolute values.

In Case You Missed It:  GOP Senator John Cornyn Viciously Booed at Republican Party of Texas Convention After Folding to Democrats on Gun Control (VIDEO)
Posted in Terrorism and tagged Freedom, Islam, Islam and Democracy, Muslims.

‘Yes or no, John Kerry’ are you and your staff allowed to use private servers?

By Robert Laurie Washington DC occupies roughly 70 square miles that are home to one of the planet’s true phenomena:...